Svetislav Pesic’s close friends call him by his nickname, “Kari”. But very few people know how it originated.

Pesic told me that in 1960, when he was 11 years old, he followed the Olympic Games in Rome. When West German sprinter Armin Hary – the first man ever to run the 100 meters in 10 seconds – won the gold medal with a time of 10.2 seconds, Pesic raced out into the street and exclaimed: “Wow, this Kari sure is fast!” It was just a child’s mistake, but one that stuck with him for the rest of his life.

Despite being born in Novi Sad, in the northern Serbian region of Vojvodina, Pesic is from Pirot, a Serbian city by the Bulgarian border. In fact, when he travels to Pirot, he uses the Sofia airport, which is some 200 kilometers closer than the Belgrade one.

During his childhood, Pesic was a football goalkeeper on his neighborhood team and in his primary school. But his mother grew angry because of his dirty and ripped clothes, so Pesic decided to change sports. That’s when he discovered basketball and showed some talent for it. He played point guard from day one: he had perceptive vision, a great long-range shot, and a good sense for assists.

KK Pirot had a solid team. It was no first division side, but some players stood out. In the summer of 1967, when he was heading off to Belgrade for college, Pesic was one of Pirot’s best two players, each of whom signed for one of the eternal Belgrade rivals: Pesic went to Partizan and Zoran Lazarevic joined Crvena Zvezda.

Over the following four years, Pesic played decently but he was no star. The moment that turned his life upside down was when a call came from Bogdan Tanjevic. It was 1971 when Tanjevic, until then an OKK Belgrade player, accepted an offer to coach KK Bosna Sarajevo, a young team in the Yugoslav second division with an ambitious group of directors. The following eight years saw Pesic excel as the point guard at Bosna, leading the team from the second division to the Yugoslav League title, the national cup, and even a EuroLeague crown on April 5, 1979 against Varese.

Tanjevic needed a quality playmaker and he nailed it with Pesic, who had far more experience than future stars of the team such as Mirza Delibasic, Zarko Varajic and Ratko Radovanovic. In the European final, Pesic could play just 6 minutes due to injury, but he won his first European title. Not even Pesic, however, could have imagined that he would win several more as a coach.

Pesic finished his degree in economics and married Vera, who played for Zeljeznicar Sarajevo, where their children, Marko and Ivana, were born. After bringing his playing career to an end, his first job was director at Bosna for the 1979-80 season. But the following season he would already sit on the bench to coach, and he has continued to do so to this day.

In his second season, 1982-83, Pesic won his first title as coach: Bosna became the Yugoslav League champion by defeating Sibenka and its young prodigy Drazen Petrovic in a controversial final that did not feature the third game, due to be played at a neutral venue, because Sibenka protested the cancellation of Game 2, for which it had already received the championship trophy and medals, and didn’t show up for the next one. For Pesic, it was just the start of a brilliant coaching career.

Pesic stayed at Bosna until 1987 and won the national cup in 1984, but the federation quickly saw his qualities and put him in charge of the cadet national team. Pesic immediately led his young players to the European gold medal in 1985 in Bulgaria. That generation was breathtaking, with Toni Kukoc, Vlade Divac, Nebojsa Ilic, Emilio Kovacic and Slavisa Koprivica. One year later, the same group of players plus Dino Radja, Sasa Djordjevic, Luka Pavicevic and Teo Alibegovic became junior European champs in Austria. The project peaked in August 1987 at the FIBA U19 Basketball World Cup in Italy, where the same players took the title by twice beating a strong American team featuring Larry Johnson, Gary Payton and Lionel Simmons.

In the group stage, Pesic’s team gained its first victory over the USA, winning 110-95 behind 37 points by Kukoc, who famously made 11 of 12 threes. In the title game, Yugoslavia’s 86-76 victory was based on the strength of big guys Divac and Radja and, of course, Pesic, who defeated American coach Larry Brown in the tactical battle. The Americans’ defense on Kukoc worked, holding him to just 9 points, but Radja and Divac shined by dominating the boards and scoring at least 20 points each. Yugoslavia finished the tournament with a scoring average of 112 points!

After that experience, Pesic was expecting a summons from the federation to become head coach of the senior national team, but instead of getting the call from Yugsolavia it came … from Germany. After realizing that he would not become the Yugoslav national coach, he accepted the offer. And five years later, in 1993, he masterminded one of the biggest surprises of FIBA EuroBasket history by guiding Germany to the gold medal over Russia 71-70 on a buzzer-beater by Christian Welp.

Pesic then signed to coach ALBA Berlin, and two years later he won the first – and to date only – major European competition for a German team, the 1995 Korac Cup. ALBA making the quarterfinals was no surprise, but when it eliminated Fortitudo Bologna (77-73, 80-80) nobody doubted it was a good team anymore. The next victim, in the semifinals, was Caceres of Spain (93-70, 72-74). Trieste of Italy awaited in the final. That season, the Italian team played its home games in Milan and was coached by Tanjevic, so two old friends who had started together in KK Bosna were in a European final once again, but this time as rivals.

On March 8, 1995, the game in Milan ended in an 87-87 tie. Dejan Bodiroga (17 points) and Nando Gentile (16) led Trieste, but ALBA had Sasa Obradovic, its future head coach, in great form as he finished with 34 points. ALBA won the second game 85-79, so Pesic took his first European trophy as a coach at club level.

After 14 years, Pesic ended his German stint and went back to Belgrade to finally become the national team head coach. He won the 2001 EuroBasket in Turkey and the 2002 World Cup in Indianapolis – the last two titles for Yugoslavia.

Then he returned to club basketball and moved to Spain, signing for Barcelona in the summer of 2002 with one single goal: winning the EuroLeague for the first time, especially with the following year’s Final Four scheduled to be hosted in that city. And he delivered: on May 11, 2003, Barcelona finally claimed its long-sought EuroLeague crown in front of 17,000 loud fans, triumphing 76-65 over Benetton Treviso. Bodiroga, who was named Final Four MVP, scored 20 points, Fucka added 17, Rodrigo De la Fuente 11 and Sarunas Jasikevicius 8.

Pesic was less successful with Virtus Rome and Dynamo Moscow, the latter of which he took to the EuroCup semifinals in 2008, where he was eliminated by his future club, Akasvayu Girona, 78-81. With Girona, Pesic won the FIBA EuroChallenge against SK Azovmash, 79-72, led by 25 points from Ariel McDonald.

After coaching Valencia in 2010-11 and then Crvena Zvezda Belgrade, the summer of 2012 saw Pesic return to the German national team for the 2013 EuroBasket qualification round. And he was soon back to club work in that country when he became head coach at FC Bayern Munich, where his boss – the club’s general manager – was his son, Marko. Furthermore, his daughter, Ivana, married Jan-Hendrik Jagla, a former member of the German national team who played for Pesic in Munich.

Having helped Bayern’s surge towards the elite of European basketball, Pesic later returned to Barcelona in 2018 and immediately oversaw another Spanish Cup triumph, before leading the team back into the EuroLeague playoffs after a two-year absence and winning the Spanish Cup again.

If my numbers are correct, Pesic has now won 23 titles: he was a Yugoslav Cup champ with Bosna, a five-time German League champ – four with ALBA, one with Bayern – and a two-time German Cup champ with ALBA. He has also won three Spanish Cups with Barcelona plus European trophies with ALBA, Barcelona and Girona. That’s along with his international success as the only coach to have won EuroBasket gold with two different countries, Germany in 1993 and Yugoslavia eight years later.

Right from the beginning of his career, Pesic has always trusted young talent and established stars alike. While coaching Bosna, he still had his former teammates Ratko Radovanovic, Predrag Benacek and Boro Vucevic. In the Yugoslav national team he called upon Kukoc, Divac, Radja and Djordjevic, while in Germany he led Welp, Gunther Benke, Henning Harnish and Detlef Schrempf at the Barcelona Olympics in 1992. At ALBA, he coached Sasa Obradovic, Teo Alibegovic and Henrik Roedl. For the 2001 EuroBasket, as Yugoslavia’s head coach, there was Predrag Stojakovic and at the 2002 FIBA World Cup he had Vlade Divac.

His best players were always his extension on the court, the executers of his ideas. Pesic’s practices are long and tough because he firmly believes that “the way you practice is the way you play.”

He likes to focus on defense but is not a slave to his own systems. Pesic belongs to the Yugoslav school, which follows the unwritten rule that a coach must adapt to the players at his disposal. Strategy also depends on the opponent’s weapons.

Even if he signs players for every position, Pesic has always followed the idea that the team has to be built around a good point guard. He has coached Djordjevic, Obradovic, Jasikevicius, Marko Jaric, Victor Sada and Milos Vujanic, among many others.

Pesic is a temperamental coach, spending half the games on the court, signaling plays with his hands to his players. He has been called for many technical fouls, even ejections, due to his reactions, but he won’t change because that’s part of his image, and a weapon to motivate players.

He is also a practical coach, not very fond of whiteboards. He sets some basic rules, but also gives his players the freedom to create according to their criteria. He insists on physical preparation. The preseason is always hard for his teams, and normally takes place up some mountain. But he also loves to laugh and tell jokes, and has uttered many famous sentences, such as “It’s better to win than to lose” and “It’s better to finish first than second.”

Results and titles have proved him right.

Tue Sep 29 , 2020
After missing the 2016 Olympics in Rio, Los Angeles Lakers’ superstar LeBron James wants to take part in the upcoming Olympic games. Originally set for 2020, the Olympic games will begin July 2021 in Tokyo. “I was told he wants to plan on being able to play, but no one […] 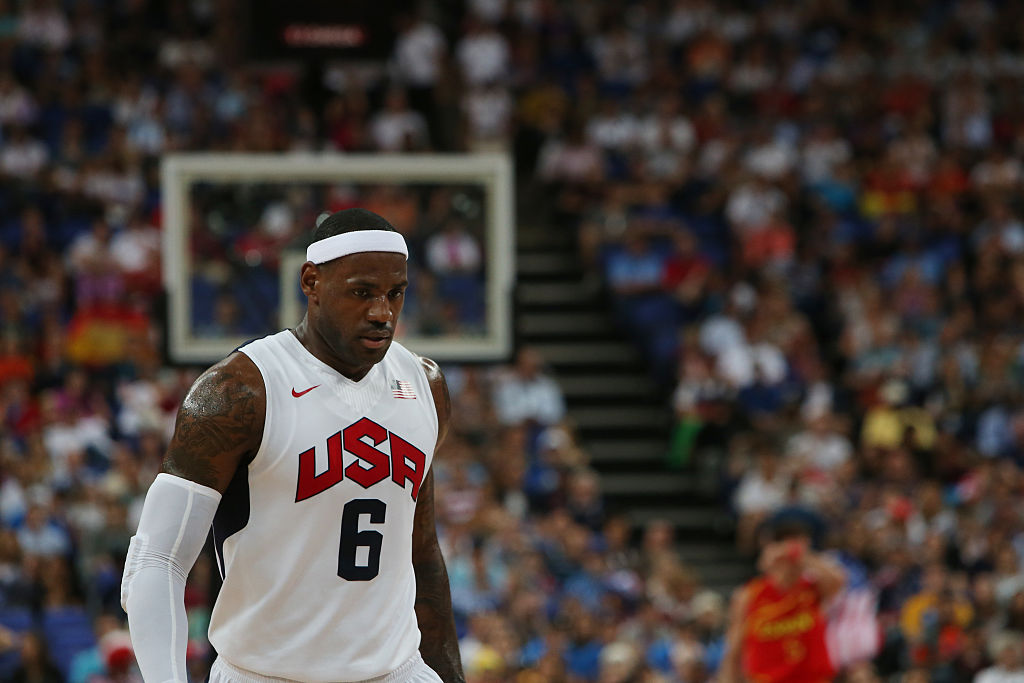