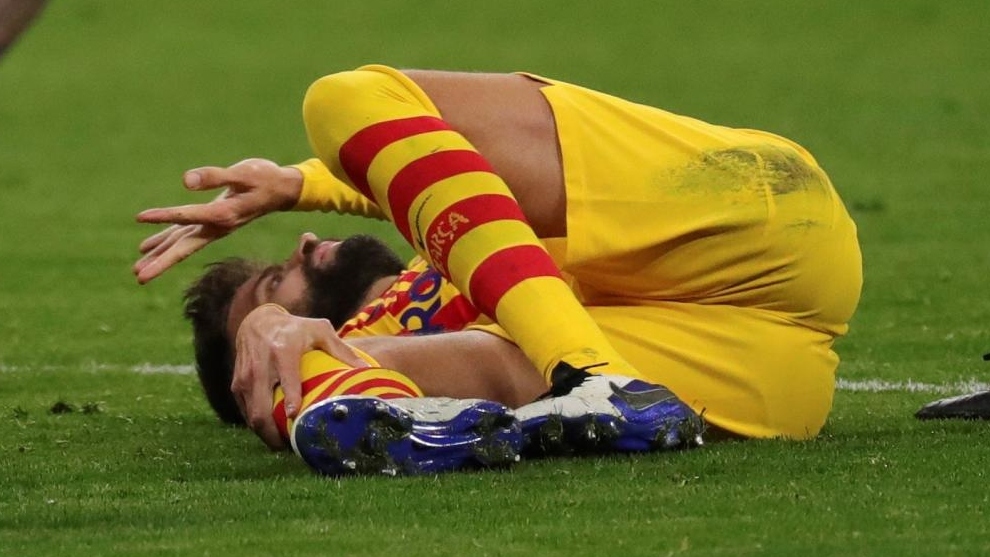 The final scoreline wasn’t the only concern for Barcelona as they went down 1-0 away at Atletico Madrid on Saturday night, as there was also concern about Gerard Pique and it has been confirmed that he has a serious knee injury.

Barcelona’s fears have been confirmed this Sunday as the 33-year-old has injuries to the internal lateral ligament and anterior cruciate ligament of his right knee and will spend a significant time on the sidelines.

“Tests carried out this Sunday on first-team player Gerard Pique have shown that he has a grade three sprain in the internal lateral ligament and partial injury to the anterior cruciate ligament in his right knee,” a statement explained. “He is, therefore, not available for selection and the evolution of the injury will condition his availability.”

On Saturday night, Barcelona explained that they believed the injury was a knee sprain. However, more thorough tests have discovered that the injury is worse than that.

This is a huge blow for the Blaugrana as they’re losing one of their best players and one of their leaders. They’re also losing a player in a position where they already had a shortage. Clement Lenglet is the only available centre-back right now since Ronald Araujo is still recovering from a short-term injury and Samuel Umtiti is so often injured too.

Barcelona failed to sign Eric Garcia in January and now the Catalan club will have to decide if they make another attempt to sign him or another centre-back in January. They could bring in someone on loan. For the immediate future, Ronald Koeman may have to put Frenkie de Jong in central defence or call upon players from the B team.

Sun Nov 22 , 2020
The Manchester City loanee worked with the Spanish head coach while he was serving as Pep Guardiola’s assistant at Etihad Stadium Jack Harrison has described Mikel Arteta as “inspirational” and feels the Arsenal manager is fully deserving of his burgeoning reputation. Harrison’s Leeds United entertain Arsenal in the Premier League on […]