John Barnes has rejected suggestions that Roberto Firmino is no longer offering enough to the Liverpool side after a quiet start to the season.

The Brazilian is yet to score in 2020/21 and was one of the most criticised players after the Reds’ humiliating 7-2 defeat at Aston Villa.

That comes after his ability to continue leading the line for Jurgen Klopp’s side was questioned after he managed just one home goal in the entirety of last season.

Firmino’s performances have even led to some stating he needs to be dropped or replaced after the international break.

But Barnes says Firmino’s form is of no concern to him, suggesting that his true value to the team often goes unnoticed.

Speaking to BonusCodeBets (via Goal) he said: “No [I’m not concerned], is the answer. Firmino’s role is slightly different and it’s not necessarily about netting the ball. In fact, he brings more to the team than just goals.

“By having him supporting Salah and Mane in front of the net, and for those two to lead the goal scoring, has done the team a world of good, which became very clear last season.”

Despite his supposed poor form, Firmino has still started every Premier League game so far this term.

But with Takumi Minamino waiting in the wings and Diogo Jota making a promising start to his Anfield career, he may be under pressure to start producing his best football once again sooner rather than later.

In other news, Liverpool boss Jurgen Klopp has been told he made a bad choice in allowing Rhian Brewster to depart the club.

The promising young striker joined Sheffield United in deal worth £23.5million. With game time hard to come by with the Reds, he made the choice to leave permanently rather than on another loan.

Fri Oct 9 , 2020
Nigeria 0-1 Algeria: African champions pip Super Eagles in Austria A strike in the opening 10 minutes was enough to separate both teams at the Jacques Lemans Arena on Friday Algeria defeated Nigeria 1-0 in Friday’s international friendly encounter in Austria, thanks to Ramy Bensebaini’s lone strike in the opening […] 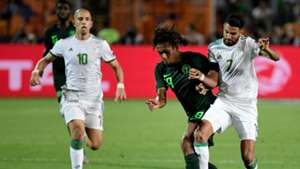