Eric Maxim Choupo-Moting is set to join Bayern Munich on a two-year contract, Goal can confirm.

The 31-year-old Cameroon forward has been without a club since leaving Paris Saint-Germain at the end of last season.

Choupo-Moting will provide cover for Bayern talisman Robert Lewandowski, with German outlet kicker suggesting the 19-year-old Joshua Zirkzee will be sent out on loan to gain more regular first-team action.

Formerly of Stoke, Choupo-Moting was an unexpected hero for PSG in their run to the 2019-20 Champions League final, coming off the bench to score a 93rd-minute winner over Atalanta at the quarter-final stage. He also made a substitute appearance in the final against Bayern, but was not able to repeat his heroics.

The 6’3” forward has plenty of Bundesliga experience under his belt. Having come through the youth system at hometown club Hamburg, he has also played for Mainz, Nurnberg and Schalke, scoring 45 Bundesliga goals in 204 games between his four German clubs to date.

Now, he is likely to play a similar wildcard role to that which he enjoyed in Paris.

He started 13 Ligue 1 games and appeared as a substitute in 18, scoring six goals, though his winning goal against Atalanta should mean he is remembered fondly by the club’s fans.

PSG boss Thomas Tuchel confirmed in September that the club had offered Choupo-Moting a new contract.

“It’s one of the possibilities [a new contract for Choupo-Moting]. Everything depends on whether you want to stay and accept the club’s proposal,” Tuchel said.

“My opinion on him has not changed, he accepts the same role to the one he occupied, he can be a good player for us. His role would be the same and if he accepts, it could well be that he remains [at the club]. If he has other possibilities, he must reflect.”

PSG were left short of strikers when Choupo-Moting and Edinson Cavani left, but the Ligue 1 champions are now close to signing Moise Kean on loan from Everton.

Cavani, meanwhile, is set to join Manchester United. Cavani’s PSG contract expired earlier in the summer, and the Uruguayan did not sign an extension to play in the Champions League.

Barcelona: Rakitic goes back in time

Sun Oct 4 , 2020
AFP Just over a month after leaving Barcelona, Ivan Rakitic will return to the Camp Nou on Sunday evening. He’ll do so once again playing for Sevilla, the club where he made his name in Spain and where he attracted the interest of Barcelona in the first place. Rakitic didn’t […] 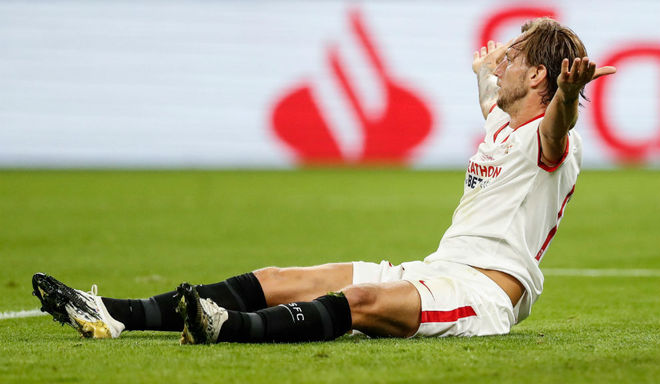