Steve Mounie sealed Brest’s 4-1 win over Saint-Etienne with his first-half effort in a Ligue 1 outing on Saturday.

It was a harvest of goals in the first 45 minutes as all efforts came just before the interval.

Olivier Dall’Oglio’s side got off to a flying start at the Stade Francis-Le Ble with a seventh-minute opener from Franck Honorat, courtesy of an assist from Irvin Cardona.

Jean-Kevin Duverne doubled the lead in the 23rd minute but Cameroon defender Harold Moukoudi linked up with Mahdi Camara to reduce the deficit for Saint-Etienne eight minutes later.

Shortly after Camara’s effort, Cardona stretched Brest’s lead again before Mounie sealed all three points for the hosts with his goal in the 38th minute.

The 26-year-old attacker who returned to France this summer, after struggling in the Championship with Huddersfield Town last campaign, has scored three goals in nine Ligue 1 appearances so far.

Mounie was later replaced in the 79th minute and Algeria’s Haris Belkebla played the entire duration for Brest. Meanwhile, his compatriot Ryad Boudebouz alongside Gabon’s Denis Bouanga, Cameroon duo Moukoudi and Yvan Neyou Noupa were on parade for Saint-Etienne.

The result was Brest’s second straight win at home after they defeated Lille 3-2 in their last league outing before the international break.

They climbed to 12th in the Ligue 1 table after gathering 15 points from 11 matches, while Saint-Etienne dropped to 15th with 10 points after the same number of games.

Mounie will hope to help Brest build on their fine winning run when they visit Metz for their next Ligue 1 fixture on November 29. 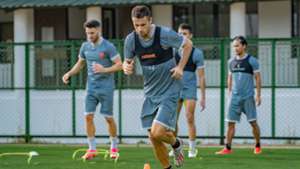