Caroline Garcia upset 16th seed Elise Mertens to reach the pre-quarterfinals of 2020 Roland Garros. The Frenchwoman won a nervy and an equally dramatic three-setter, coming from a set down 1-6, 6-4, 7-5 in two hours and 15 minutes.

Garcia needed six match points to put the match to bed. She first had a chance to serve for the match at 5-4 in the third set but was broken from 40-0 up. At that point, the notorious French crowd, too, got into the act as they booed the Belgian.

This is the third time in four years that she has reached the second week in Paris, and she is seeking her second quarter-final in her native nation after first making it to the last-eight here in 2017. Post-match, Garcia shared, “For sure it was a great feeling out there, and especially the match was a big fight in the second and third sets.

To be able to live this kind of moment, first of all, because we didn’t know what was going to happen, to be able to play Roland-Garros, it’s a great feeling, and to have some crowd to be able to share it with, it’s even more special, especially as they were really cheering for me.

I will never forget that”. The 45th ranked Garcia will play third seed Elina Svitolina in the round-of-16. Svitolina, who has been putting some of her own Parisian demons to rest this week, had beaten Ekaterina Alexandrova earlier.

Barbora Krejcikova made it to the round-of-16 at the French Open for the first time in her career. The 24-year-old Czech beat Tsvetana Pironkova 5-7, 6-4, 6-3 in two hours and 38 minutes.

The win for Krejcikova came on the 52nd birthday of her late coach, Jana Novotna. Speaking after the match, Krejcikova dedicated her victory to Novotna who lost her life to cancer in 2017. “It was very emotional for me, very special that I could win this match… I would like to also dedicate it to her because she would be really happy for my result”.

Krejcikova will play Nadia Podoroska in the last-16 clash. Krejicikova’s doubles partner and fellow Czech Katerina Siniakova, however, didn’t have a successful outing in her singles match against Kiki Bertens.

The fifth-seeded Dutchwoman defeated Siniakova in straight sets 6-2, 6-2 in just 58 minutes. Next up for Bertens is Italian Martina Trevisan. The 159th ranked Trevisan, who qualified for the main draw, produced another upset at 2020 Roland Garros.

Sat Oct 3 , 2020
The 33-year-old is set to link up with Bartholomew Ogbeche in the Islanders’ frontline… Mumbai City FC have agreed terms to sign Adam le Fondre from Sydney FC for the 2020-21 Indian Super League (ISL) season, Goal can confirm. The club backed by the City Football Group (CFG) has already […] 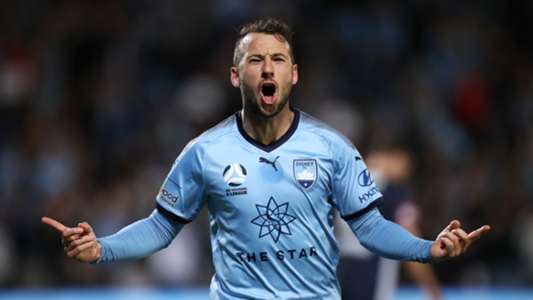