We have seen a lot of players throughout the history of the NBA who conquered the league immediately from their appearance. There were also many cases of players who did not have outstanding physical capabilities but still did their job. Perhaps we can include Dirk Nowitzki in this list because the German power forward always did his maximum on the basketball field.

Dubbed by many as the greatest European player of all time and one of the best power forwards in the history of the NBA, Dirk Nowitzki played over 1500 games and is sixth in the scoring list with 31560 points. An incredible number for a non-American player. And what’s more, he never left the Dallas Mavericks and spent his entire career in one team. You guessed right – in this article we will talk about a humble and great player of the NBA Dirk Nowitzki.

Dirk Nowitzki was born in 1978. It was kind of destined for the German player to pursue basketball because the mother of the famous athlete also played basketball, she played for the German national team at the European Championship in 1966. Young Nowitzki at first was fond of handball and tennis, but still chose basketball and at the age of 16 he made his debut in the professional league.

Four years later, Dirk Nowitzki moved to the United States and began playing for Dallas, where he spent his entire brilliant career.

In the early 2000s, he was a regular member of the first, second, or third NBA All-Star Team. most of the time during his career Nowitzki averaged more than 20 points per game and he was a very stable player.

But at first, great successes came related to international competitions: for example, a bronze medal at the 2002 World Cup in the United States, together with the title of the most valuable player of the tournament. Nowitzki received a similar prize three years later, in addition, he managed to win silver at Euro 2005, where the Germans lost to Greece in the final.

At the end of the 2006/07 season, Nowitzki was named the NBA’s Most Valuable Player. During that season Nowitzki was averaging 24.6 points and he became a member of the ‘50-40-90’ club. And before him, the title of MVP was never given to a European basketball player.

We should say that Nowitzki’s influence and greatness were not only felt in Germany and the United States. He also became a popular figure in Scandinavia, mostly because he was a European player and the similarities Nordic countries and Germany share. At the same time countries like Norway or Sweden are not particularly famous for having elite basketball players. Thus Nowitzki was an exception. When his career ascended Dirk quickly became a favorite of online Norwegian bookmakers, which was still forming itself in that period. Even know if you ask a Norwegian or any Scandinavian about who Dirk Nowitzki is, all of them will tell you the correct answer and that’s how a German player managed to gain everyone’s love. And it is difficult not to respect such a great person.

In 2008, Nowitzki became his country’s standard-bearer at the 2008 Summer Olympics. Although there the German basketball players performed unsuccessfully – they could not get out of the group, winning only one match out of five.

Nowitzki achieved serious success in 2011, winning the NBA Finals with Dallas in six games against Miami. In all these games except the last German scored the most points in his team, at the same time received the MVP of the finals. The first attempt to win the final series was five years earlier, but Dallas lost to Miami in six games. In 2011, Dirk realized his dream.

In the series he was phenomenal. You probably all remember his fadeaway shots, demolishing the whole Miami team which was a heavy favorite with LeBron James, Dwyane Wade, and Chris Bosh on the roster. But it was Nowitzki’s year and it would have been unfair had he finished his career without a championship title.

On April 10, 2019, Dirk Nowitzki announced his retirement, playing against Phoenix (120:109), and scored 30 points. There were no special messages, no events, the basketball player just finished his career without too much fuss.

He played 21 seasons for Dallas, a record in the NBA. During this time he played 14 All-Star Matches. Nowitzki is the fourth basketball player in the history of the tournament to play 1,500 games, the sixth to win in 900 games. Among Europeans and white basketball players, he is the best sniper in the NBA.

Nowitzki’s peculiarity is his performance aimed at achieving results, he did not produce a show, although in the NBA it is valued, and stood out with huge dedication. Largely due to this, the German was able to slightly change the idea of the forward’s role: for example, in the position of a power forward he not only fought under the basket but also to successfully act outside the three-point zone.

In addition, Nowitzki forced a new look in the NBA on basketball players from Europe, and in general revealing the fact that the European stood in line with American athletes in basketball. Even his signature fadeaway jump shot, when Nowitzki throws on one leg as if falling on his back, is copied by young athletes.

He is a true leader, but he is positive, easy to communicate, and always has a bad laugh at himself – such is remembered the German basketball player as a person. Pretty accurately Dirk Nowitzki describes his answer to the question of whether he wanted to trust any American sports agent: “We met with a few such people, and it was like a stand-up comedian. In just a few minutes I realized that I didn’t want to deal with them and I’d rather lose a few deals for the sake of peace and quiet.”

A couple of months ago, Nowitzki said he would be with him after his career ended: and he would spend a lot of time with the family.

Nowitzki’s career is so beautiful, and he has always worked hard on the basketball field. So his return will always be welcome. In any capacity. He was a very intelligent player and seeing him in a coaching role will also be beneficial for any NBA team. However, it is too early to talk about this.

Real Madrid: Luka Modric will do anything to stay at Real Madrid

Wed Oct 7 , 2020
Real Madrid Happy to lower salary Luka Modric and Florentino Perez. REALMADRID.COM Luka Modric is a real Real Madrid player. The Croatian was born in Zadar, raised at Dinamo Zagreb and excelled at Tottenham, but it was at Real Madrid that he received the attention and recognition that he has deserved. […] 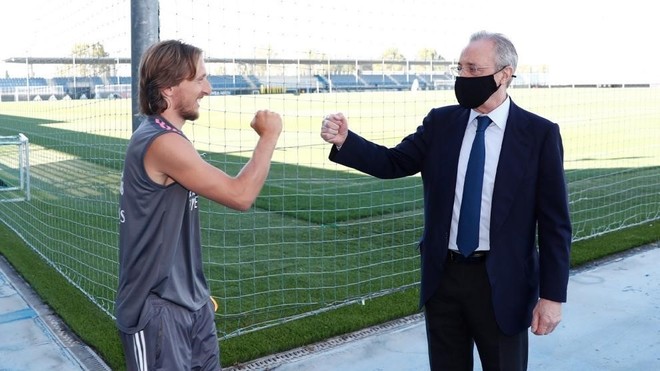