Bruno Fernandes has settled comfortably into life at Manchester United since arriving from Sporting in 2020 and the playmaker has endeared himself to Red Devils fans with his exploits.

The Portugal international has taken on a lot of responsibilities at Old Trafford in the short time he has been at the club, with set-pieces and penalty-taking duties now undoubtedly falling under his remit.

Marcus Rashford had been United’s go-to man for spot-kicks, but Fernandes’ impressive record from 12 yards saw him take over from the England star.

Indeed, despite suggesting that he would happily allow Rashford or others such as Anthony Martial and Paul Pogba to step up for penalties, Fernandes remains Man Utd’s first-choice penalty taker.

He has beaten the likes of Kasper Schmeichel, Pepe Reina and Hugo Lloris from the spot, so does Bruno Fernandes have a secret that helps him win the battle of wits?

What is Bruno Fernandes’ penalty secret?

Well, according to the player himself, there is no great formula or magic trick to his penalty success. However, if there is a secret, it is preparation and practice – lots of it.

Interestingly, while some players attempt to refine their technique, either in terms of the run-up or way of hitting the ball, Fernandes lets the situation dictate how he hits a penalty.

“I don’t have a secret,” he explained in an interview with UEFA.com.

“I think that I train a lot, I like to train a lot. I always pay attention to what the goalkeepers are doing – how they position themselves, how they best prevent shots on goal.

“Based on that, based on the match, and based on how I’m feeling on the pitch, I decide how to take a penalty.

He added: “I don’t have a specific technique in taking penalties. There’s no certain run-up I take, I just stick to what I feel is most comfortable.

“If I change it every so often, it might make the goalkeeper uncertain. I change my run-up for how I’m feeling during the match, or how I feel the goalkeeper [will move].”

What sort of record does Fernandes have then? To put it mildly, his record is pretty good.

In 2019-20, he scored eight out of eight penalties for Manchester United across all competitions, including a crucial strike in the Europa League quarter-final against Copenhagen in extra time.

Before that, in two-and-a-half seasons as a Sporting player, he took 17 penalties and missed just one.

Jose Mourinho said that his compatriot was among the best penalty takers in the world when he joked about the number of spot-kicks that had been awarded to Manchester United in 2019-20.

He told Record: “Bruno came in, was fit, played very well, improved the United team and also proved to be a great penalty taker, one of the best in the world, because he had about 20 to score.”

However, while Fernandes is clearly adept at beating goalkeepers from the spot, he is not perfect and suffered his first blemish at Man Utd in October 2020, when Newcastle United’s Karl Darlow denied him.

It was his 11th penalty for the Red Devils and his first miss.

“I didn’t do the right things. I studied the ‘keeper but I didn’t shoot the ball the way I wanted but the ‘keeper deserves credit.

“He saves the penalty, he deserves the credit, but I needed to do much better with the penalty for sure – and the next one I will.”

When his next penalty came a week later though, against Paris Saint-Germain in the Champions League, he missed again, with Keylor Navas denying him.

Or so the Costa Rican shot-stopper thought.

Luckily for Fernandes, VAR spotted an infringement by Navas – he had stepped off his line completely before the ball was struck – and the referee ordered it to be retaken.

Fernandes made no mistake on the second attempt, using the same run-up and going for the same corner.

Sun Nov 22 , 2020
FC Barcelona – La Liga Analysis from the medical expert Gerard Pique faces a significant period on the sidelines after suffering two injuries in his right knee during Barcelona’s 1-0 loss at Atletico Madrid on Saturday night and could even face a full half a year out. Doctor Pedro Luis Ripoll […] 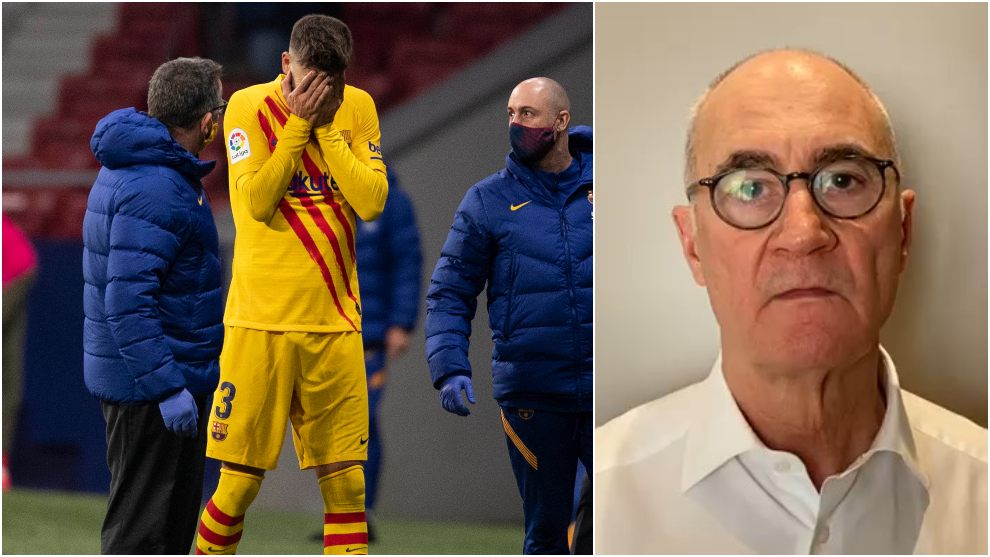