Edinson Cavani has promised to give Manchester United his all after the Red Devils confirmed the striker would wear the famous No 7 shirt for the club.

The veteran attacker has joined on a free transfer following his release from Paris Saint-Germain over the summer.

Cavani, who has won the Golden Boot in both Ligue 1 and Serie A, has signed a one-year contract. There is also the option to extend that deal for a further year.

The news was a welcome late transfer window addition for United, who were frustrated in their hunt for Jadon Sancho. You can read exactly why that move broke down, as per German football expert Raphael Honigstein.

Cavani could be handed an instant debut by United for their next game against Newcastle on October 17.

In the meantime, United have confirmed Cavani will wear their famous No 7 shirt. The shirt is arguably the most prestigious in United’s history. The likes of George Best, Cristiano Ronaldo, David Beckham and Eric Cantona all wore it to great aplomb.

Now the striker has vowed to do the shirt justice and is determined to prove his worth to United.

“It will give me great pride to wear the No 7 shirt for Manchester United,” he said.

“Now I am going to prepare for this responsibility. I will do my best to be ready and enjoy it and I hope to make my mark at Manchester United.

“I have two years of a contract with Manchester United. While here, I want to give it my all here. I feel good.”

Despite being 33 and in the autumn of his career, Cavani has been labelled ultra fit and has been tipped to make an impact.

The Athletic, quoting a source from Cavani’s old club, Napoli, have compared the Uruguayan to Juventus attacker Ronaldo.

“He is a top, top professional,” they say.

“At Napoli, most players finish training and go around the corner to the golf course. But he went for runs by himself and he would be the first in and last out.

“He is kind of like Cristiano (Ronaldo), very on top of his body. A top professional and quite selfish on the pitch.

“He wants to take every penalty and finish every counter-attack — a proper killer on the pitch.

“He is very good for the team, pushing everyone forward, on top of everyone else and making them perform. The players missed him when he left.

“He was a top player on the pitch but also in training.

“The fans were furious when he left for PSG. He was a big player and they felt betrayed. But what can you do if PSG wants someone? He has a top mentality.”

Wed Oct 7 , 2020
Rafael Nadal will face Diego Schwartzman in the semi-finals of the French Open on Thursday. from Daily Express :: Tennis Feed https://ift.tt/2GwgYoU Source of the article 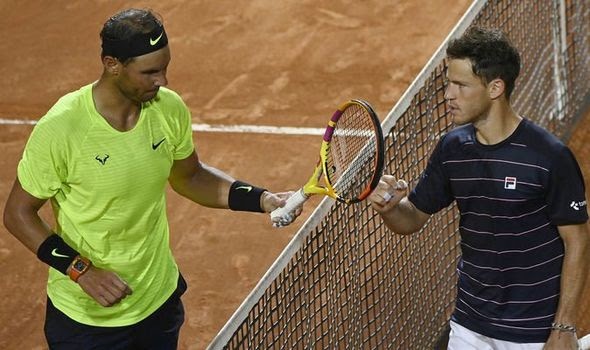