The African champion had the opportunity to represent the Super Eagles, but ended up playing for the country of his birth

Former Enyimba striker Joetex Asamoah Frimpong has revealed that he was never keen to play for Ghana initially and was only interested in playing for Nigeria.

The 38-year-old is widely remembered as one of the most successful non-Nigerian players to ply their trade in the Nigeria Professional Football League (NPFL), doing so with the Peoples’ Elephants between 2003 and 2006 and winning the Caf Champions League in 2003 and 2004 as well as two league titles, one Federation Cup, one Nigeria Super Cup crown and two Caf Super Cup titles.

Frimpong became a very famous player in Nigeria and this got him interested in representing the country. He did get a chance to represent the Under-23 squad but he was rejected after his true nationality was revealed.

Frimpong – who had previously played for El-Kanemi Warriors before moving to Enyimba – was eventually persuaded by his father to represent Ghana and got his first cap in 2005.

He was also on the books of Niger Tornadoes, Katsina United and Gabros Internationa, now FC Ifeanyi Ubah.

Frimpong says he never thought he would get a call-up to the Black Stars as they were usually in the habit of selecting foreign-based players and not players in the local league or other African leagues.

“My call-up came at the right time. In fact, I wasn’t expecting it because when you play for a club in Africa nobody watches you, mostly we want foreign players,” he told Bryt FM.

“What I know is that, when you travel outside Ghana to Nigeria or Benin, you are a foreigner but, in our case, people think that when you are in Africa you are still a local player.

“Due to this, I was not expecting any call-up until they called me for U-23. Nigeria too approached me but my dad told me to represent Ghana. I was personally interested to play for Nigeria but it took my dad to convince me.”

Frimpong represented Ghana 11 times, scoring two goals. He was part of the Black Stars squad at the 2006 Africa Cup of Nations in Egypt where they were knocked out of the group phase.

Frimpong had a short stint with Tunisian giants CS Sfaxien and played outside the shores of Africa for Al-Nasr in Saudi Arabia and Young Boys, FC Luzern, FC Grenchen and FC Zurich, all in Switzerland.

He has been in charge of Swiss outfit FC Niederbipp since 2014 after retiring from professional football a year earlier.

'This is the reward' - Banyana star Matlou excited to join Eibar

Wed Oct 7 , 2020
The South Africa international will make her professional debut with the Spanish outfit in the 2020/21 season at the age of 35 Noko Matlou has expressed her delight after joining Eibar from Sasol Women’s League team Maindies FC on a one-year deal. The newly-promoted Spanish side had announced the signing of the […] 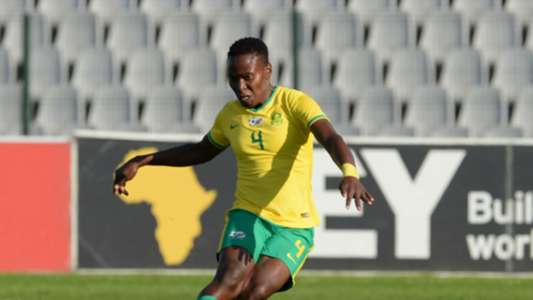