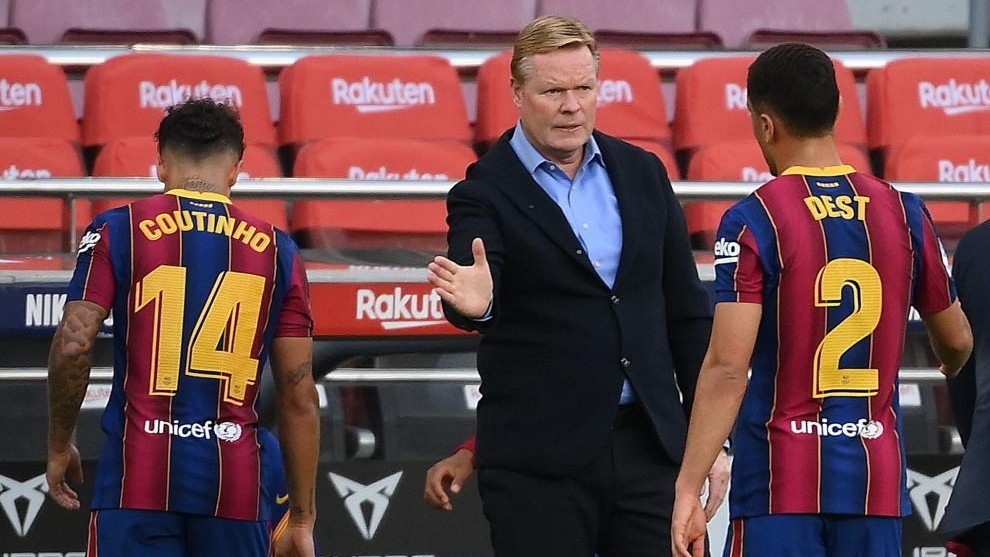 Ronald Koeman takes his Barcelona team to the Wanda Metropolitano to face an Atletico Madrid side who are let to lose at home this season.

The Blaugrana boss has a number of selection issues to sort out following the international break, especially in attacking positions.

Right-back is the only space in the back four which is currently up for grabs. It’ll be either Sergino Dest or Sergi Roberto who will play alongside Gerard Pique, Clement Lenglet and Jordi Alba. The former would be the more attacking option, while the latter the more conservative one.

In midfield, Koeman will be without Sergio Busquets, who picked up a knee injury while on international duty with Spain. Miralem Pjanic will take his spot in the team, partnering Frenkie de Jong in the midfield pivot.

If Koeman opts to stick to his 4-2-3-1 formation, he’ll have a few decisions to make going forward. Ansu Fati is not available for the next few months, leaving Pedri and Philippe Coutinho as the candidates to play on the left wing. The Brazilian was a regular in the team before getting injured at the end of October.

Everything points towards the rest of the attack being made up of Lionel Messi, Antoine Griezmann and Ousmane Dembele. The former Borussia Dortmund forward is not a certainty to start against Atletico, with Trincao another option that Koeman has.

Skip Bayless on Steph Curry without Klay: "He needs to be in the MVP conversation from start to finish"

Sat Nov 21 , 2020
Photo: Ezra Shaw/Getty Images Following the news that the Golden State Warriors star scorer Klay Thompson is expected to miss the entire season after an MRI revealed that he had torn his Achilles, award-winning journalist, TV host, and author Skip Bayless shared some of his thoughts on how much pressure […]