K’Ogalo might play the Caf Champions League preliminary round without the services of their head coach Robertinho, who is ‘unqualified’

Former Gor Mahia treasurer Sally Bolo has hit out at the club’s current management for not following set guidelines by the Football Kenya Federation (FKF) regarding the accreditation of their new coach Roberto Oliveira Goncalves.

Goal exclusively revealed the Confederation of African Football (Caf) had written to the FKF and the club asking to see his Caf A papers, or else he will not be allowed to handle the team during the Champions League.

As it stands, K’Ogalo have been unable to provide these documents and might play Rwanda’s APR without their coach.

“Part of the requirements is the qualification of the head coach, all have had qualifications from different countries and none has ever had a Caf A licence but we have always made sure that the papers they hold are equalized as per Caf requirements,” part of the statement by Bolo and obtained by Goal read.

“The same coach, [Robertinho], has handled clubs in Tunisia and Rayon up to the Caf Confederation Cup quarter-finals. Does it mean that those clubs did the right thing? We seem to have at the moment none in the club who knows what to do!”

The former official has pointed out the Kenyan champions could have followed the right protocol to ensure the team’s chances of making it to the next round of the competition are not jeopardized.

“What should have been done is to accredit the coach with the technical department of FKF,” Bolo continued.

“A circular was sent out to all the premier league and super league clubs to that effect but unfortunately we never submitted papers for the head coaches accreditation!

“Secondly, the club should have engaged FKF to get in touch with the Brazilian Football Association to authenticate the coach’s A license and request for his equalization!

“We still have one week to go and to ensure that we have a coach on the bench with the Caf requirements.”

Goncalves, who previously managed Rayon Sports of Rwanda, has 25 years of coaching experience and has been to a number of African countries, the Middle East as well as his native country Brazil as head coach.

He was in charge of Rayon Sports when they denied Gor Mahia a place in the quarter-finals of the Caf Confederation Cup as he masterminded a 2-1 win at Kasarani Stadium in 2018.

He joined K’Ogalo to take the place of Steven Polack, who left the club on mutual agreement, and on signing for the Kenyan champions, he revealed why he chose Gor Mahia over other clubs.

Sat Nov 21 , 2020
A star studded Mumbai City FC will face the NorthEast United challenge in the first weekend of the ISL… Source of the article 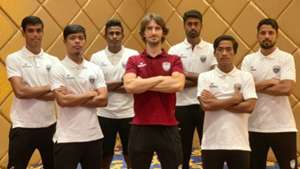