Rafael Nadal tried to change his game against Daniil Medvedev on Saturday in the semi-finals of the Nitto ATP Finals. But the Russian solved the Spaniard’s puzzle, and that helped him reach the championship match at the season finale.

During Group London 2020 play, Nadal did not excessively use his slice. He sliced 14 per cent of his shots against Andrey Rublev, 12 per cent against Dominic Thiem and 10 per cent against defending champion Stefanos Tsitsipas in a must-win match.

The 20-time Grand Slam champion then made a massive tactical change against Medvedev, slicing 31 per cent of the time against the three-time ATP Masters 1000 titlist to slow the pace of the match and make things difficult for Medvedev, who hits some of the flattest groundstrokes on the ATP Tour. A biting slice stays lower to the court, making the next shot tougher for Medvedev to hit.

Using this strategy and smart trips to the net helped Nadal stymie Medvedev and gain a 6-3, 5-4 lead, putting him in position to serve out the match.

“He was just slicing slowly and playing slowly from there,” said Medvedev, who had lost his three previous ATP Head2Head meetings against Nadal. “I think he only hit maybe two winners in the match from the backhand side.”

The Spaniard actually hit six backhand winners, but by using the slice so often, which worked for a good chunk of the match, he allowed Medvedev to take the initiative in the important moments. Nadal saved the first two break points he faced at 3-3 in the decider, and he did not hit a slice on either point.

But the third time was the charm for the fourth seed, as Medvedev finally took advantage of the opening the slicing gave him. On the third break point he faced in the game, Nadal hit three consecutive backhand slices. On the third one, Medvedev anticipated the lefty would hit a slice, and he snuck into net, where he caught Nadal off guard. His backhand volley forced the second seed to attempt a chip backhand lob, which Medvedev smashed away with an overhead.

It was a perfectly constructed point by Medvedev in which every element of his game clicked together.

In the final set of their semi-final, 37 per cent of Nadal’s shots were slices. In his first three matches of this year’s Nitto ATP Finals, his highest slice percentage in a set was 17 per cent in the first set against Rublev, which was his first set of the week.

Nadal had a strategy against Medvedev, and it didn’t come out of nowhere. Last year at The O2, the Spaniard rallied from a 5-1 deficit in the third set to defeat Medvedev. In that match, the lefty sliced 23 per cent of the time, but he only sliced 16 per cent of his shots in the deciding set, when he made his epic comeback.

The slice kept Medvedev at bay for a while on Saturday, but the Russian kept fighting and finally got more comfortable dealing with it as the match wore on.

“[I] started to feel more the link of the game. I think I could feel it in the score and actually everything about the match,” Medvedev said. “The tie-break and third set [were] really good.”

Sun Nov 22 , 2020
Mumbai City won only the possession battle on Saturday… Mumbai City had 65 per cent of the ball against NorthEast United in their first 2020-21 Indian Super League (ISL) match on Saturday. Excellent and expected right? Well, they also registered zero shots on target and lost the game 0-1.  It was a […] 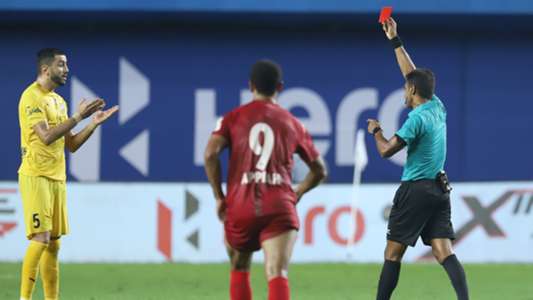