Chennaiyin FC head coach Csaba László has done his homework as he knows how Owen Coyle turned the fortunes of the Marina Machans as they finished runners-up. Hence, he doesn’t wish to change their style of play but just make minor tweaks where necessary.

“In two weeks you don’t change many things, but you have to change a few things to get in your ideas. Last season Chennaiyin played good football. I am not willing to change the style much. We have got new players. But we will be taking a lot of things (from the previous season). I have my own idea which I want to implement. If you have six weeks of preparation it would have been different. But the way (we play) and the idea would have remained the same,” stated the new Chennaiyin manager.

Co-incidentally he will be up against his predecessor, Coyle, in his debut match in India. The Jamshedpur manager knows the current crop of Chennaiyin players like the back of his palm as he was instrumental in their upturn of fortunes last season. But, László does not hold the opinion that it will be an advantage for the Red Miners.

“Everybody knows everybody. There is no secret in football. We have changed a few players. We also know everything about our opponents. The most important thing is confidence along with motivation. We have to make the best decisions on the pitch. I have a lot of friends around the world and Coyle is one of them. We must be prepared. The time was very short and this is a puzzle we have to solve. Coyle is new at Jamshedpur and so am I in Chennaiyin. I don’t think it will have an impact.”

The 56-year-old agreed that it has been a difficult pre-season. He came to India straight from Romania and his family is in Edinburgh which has made life a bit more difficult. However, he remains focused on the job at hand and wants to start the season on a positive note.

“This has not been easy. Not just for me, for everyone and it has been very difficult. We train to build up confidence. I try to see everything positively and not complain. We can complain about the weather or food but I like Indian food. We just have to remain positive. The chemistry between me, the club and my players has been great. We have to win games and concentrate on football.”

Meanwhile, Chennaiyin skipper Rafael Crivellaro heaped praise on fellow midfielder Anirudh Thapa and winger Lallianzuala Chhangte. The Brazilian has enormous confidence in their abilities and believes that they are the future of Indian football.

“For me, Chhangte and Thapa are the best in India. I love the way they play. They can improve a lot and they are the future. My aim is to do the best with them and push them further. We have other players who are talented as well. They will play a key role in this season.”

In the previous campaign, he struck a wonderful partnership with Nerijus Valskis, who has now joined Jamshedpur. But Crivellaro has moved on from the heroics of the past and is focussed on doing better this season.

“Last season was pretty good for the team. Not only Valskis, but Chhangte and (Andre) Schembri also scored many goals. But football is like that. We are in different teams now and our new players are very good. My target is to get better this season,” said the former Wisla Krakow player.

Sun Nov 22 , 2020
The Odisha FC boss wants his side to be efficient as well as attractive this season… Odisha FC defeated Hyderabad FC twice last season and Stuart Baxterw, ho took charge of the former, doesn’t believe that history would have any role to play on Monday when the two sides kick-start their Indian Super […] 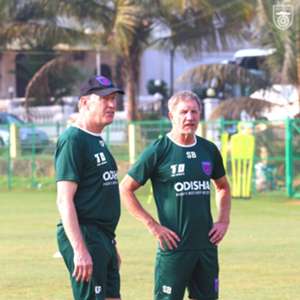