Juventus forward Cristiano Ronaldo scored for the fifth Serie A game running to inspire his side to victory over Cagliari on Saturday.

Cristiano Ronaldo scored a first-half double to help Juventus return to winning ways with a routine 2-0 victory over Cagliari in their Serie A clash at the Allianz Stadium.

Juve conceded a last-gasp goal to Lazio last time out to make it only three wins from seven league outings this term, but Ronaldo inspired them to three points on Saturday by scoring for the fifth league game running.

The Portugal international curled in the opening goal with 38 minutes played and grabbed a second with an impressive hooked finish shortly before the interval.

Andrea Pirlo’s side were unable to add to their tally but Ronaldo’s brace was enough as they moved into second place, albeit having played a game more than the majority of the teams around them.

Federico Bernardeschi rounded off a flowing team move with a thumping finish after 11 minutes but the goal was ruled out due to Alvaro Morata being offside in the build-up.

The lively Bernardeschi had a shot saved by Alessio Cragno and Dejan Kulusevski fired wide from a good position before Ronaldo cut onto his right and picked out the far corner.

Ronaldo did not have to wait long for his second, sticking out a leg to send Merih Demiral’s flick-on flying past Cragno from eight yards with an improvised finish.

Having played an important part in that second goal, Demiral nearly added Juve’s third as his powerful header cannoned off the crossbar.

Cragno kept out another attempt from Bernardeschi three minutes later and the missed chances nearly came back to haunt the home side.

Ragnar Klavan nodded into the bottom corner with a little over 20 minutes left but the goal was chalked off for a foul on returning Juve defender Matthijs de Ligt.

What does it mean? Ronaldo lifts Juve up the table

This is the first season since 2015-16 that Juve had been outside the top two position heading into matchday eight.

Thanks to this Ronaldo-inspired victory, Pirlo’s men are now a point behind Milan ahead of the leaders’ game in hand away to Napoli on Sunday – far from an easy contest.

With his latest double, Ronaldo becomes the first Juve player to score in each of his first five Serie A appearances in one season in the three-points-for-a-win era, netting eight times in total.

Juve had not won a game when picking Morata and Ronaldo together before this contest but it is clear they are Pirlo’s preferred pair to lead the line, with Paulo Dybala a second-half substitute.

Morata was unable to score from his two attempts but he teed up Ronaldo for the opener to maintain his impressive start to the campaign for club and country.

A welcome return for De Ligt

With Leonardo Bonucci and Giorgio Chiellini out, De Ligt was rushed back for his first appearance since undergoing shoulder surgery in August.

He made more clearances (3) than any Juve player and won all five of his duels, but questions must be asked of Cagliari’s attack, having failed to register an attempt on target across the 90 minutes.

Juventus switch focus back to the Champions League on Tuesday with a home match against Ferencvaros. Cagliari, who had won four of their last five matches in all competitions prior to today, host Hellas Verona in the Coppa Italia on Wednesday.

Pique raises alarm bells for Barca after hobbling off against Atletico

Sat Nov 21 , 2020
The defender was in clear discomfort after taking a heavy blow to the knee and was replaced by Sergino Dest A disappointing afternoon for Barcelona was compounded by potentially serious injury to Gerard Pique, who was forced off following a freak collision with Atletico Madrid star Angel Correa.  Needing a […] 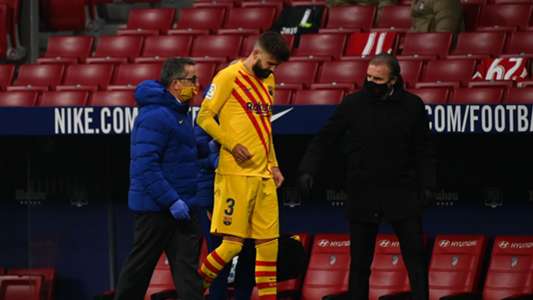