Speculation continues to suggest that a talismanic figure could leave Camp Nou in 2021, but his current coach is reluctant to be drawn on the subject

Ronald Koeman remains convinced that Lionel Messi will stay at Barcelona and has refused to be drawn into a debate regarding the Argentine’s future.

A stunning transfer saga that saw a fuse lit over the summer appears set to rumble on throughout the 2020-21 campaign.

Having grown disillusioned with life at Camp Nou and the direction in which Barca were heading on and off the field, Messi aired his desire to move on during the last window.

His declaration stunned the sporting world and rocked those in Catalunya.

A six-time Ballon d’Or winner made it clear that he wished to take on a new challenge and intended to trigger an exit clause in his contract.

Barca moved quickly to block his path, with the 33-year-old informed that he would not be freed from his current deal.

Messi accepted his fate and revealed in an exclusive interview with Goal that he will be staying put until 2021.

He has, however, stopped short of committing to fresh terms and is due to hit free agency at the end of the season.

Talks can be held with interested parties from January, with the likes of Manchester City said to still be sniffing around.

Barca will not be throwing in the towel and accepting their fate, with the hope being that a one-club man can be convinced to extend his association with La Liga giants.

Koeman has been given no indication that an all-time great is still edging his way towards the exits, with the Dutchman expecting Messi to remain part of his plans for the foreseeable future.

Asked whether he sees the mercurial South American leaving Barca, Koeman told reporters: “No, and I won’t say any more about this.”

The Blaugrana boss was pressed on the matter again at a later stage, but sought to bring the grilling to a close by saying: “I won’t take any more questions on this.”

While Barca are understandably reluctant to discuss the prospect of their club captain jumping ship, that outcome remains a distinct possibility.

Presidential elections are not due to be held at Camp Nou until January 24, with Josep Maria Bartomeu removed from his post after a vote of no confidence, and it could be that Messi has agreed a deal elsewhere by the time a new regime is put in place.

Fri Nov 20 , 2020
Jurgen Klopp has confirmed that his midfield duo are “close” to a return – but his captain will be missing this weekend Liverpool will assess the fitness of midfield duo Thiago Alcantara and Fabinho ahead of their Premier League clash with Leicester. Jurgen Klopp confirmed on Friday that the pair were edging […] 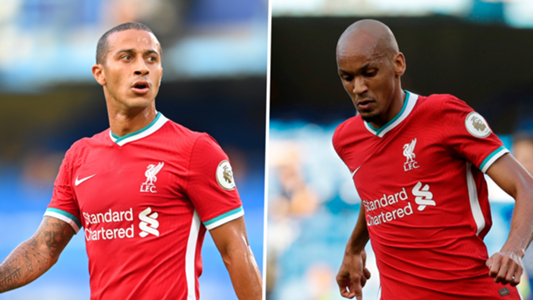