Ronald Koeman has refused to rule out a transfer deadline-day move from Barcelona to Manchester United for Ousmane Dembele.

The France forward has emerged as a serious alternative to Jadon Sancho over the last week.

TEAMtalk understands United are still pushing for Sancho, but Borussia Dortmund have stood firm all along and will not budge on the £108m asking price.

Sancho is in England ahead of international duty and would be available to push through a deal to United.

However, the England forward may have more on his mind after appearing to break Government coronavirus rules.

The Sun has shared footage which appears to show Tammy Abraham, Ben Chilwell and Sancho were at a party in London with more than six people – breaking the Government’s “rule of six” coronavirus guidelines – on Saturday evening.

Sky Sports claim Dortmund are “very angry” with Sancho because the player has missed the last two games because of feeling unwell.

He has also missed training last week with the Bundesliga side due to a “respiratory infection” but Dortmund are frustrated with the 20-year-old’s behaviour.

It will not change their stance on Sancho though, with PA and Sky reporting Dortmund will reject all offers for him today. Their self-imposed August 10 deadline passes last month and they have no intention of bowing down to United.

Borussia Dortmund on Sun story, inc Jadon Sancho: “‘We are in close contact with the English FA and representatives of the national team. We are aware that they are following COVID-19 protocols in line with UEFA. It would not be appropriate for us to add comment at this stage.”

According to the BBC, Dortmund made a statement on Sancho: “We are in close contact with the English FA and representatives of the national team. We are aware that they are following COVID-19 protocols in line with UEFA. It would not be appropriate for us to add comment at this stage.”

With an awful lot to do to tie up a deal for Sancho, United have been looking at Dembele.

Apparently Dembele wants a permanent move, while United are chasing a loan deal.

And Koeman, who left the attacker as an unused sub at the Camp Nou on Sunday, says anything could happen.

“What is certain in the world? I don’t know,” said the Barcelona coach

“At the moment, he’s a Barcelona player. There’s still one day left for incomings and outgoings. We’ll see.”

Dembele was on the bench for Sunday’s 1-1 draw with Sevilla and Koeman explained why the forward did not get on.

“I opted for [Francisco] Trincao, Pedri and [Miralem] Pjanic [off the bench].

“We needed more control and that’s why I made these changes.”

Mon Oct 5 , 2020
EFE Vinicius Junior was on target again for Real Madrid this past weekend, helping Los Blancos to a 2-0 win against Levante at the Estadio de la Ceramica. The Brazilian opened the scoring on the day, with Karim Benzema getting the second, and by doing so the youngster bagged his […] 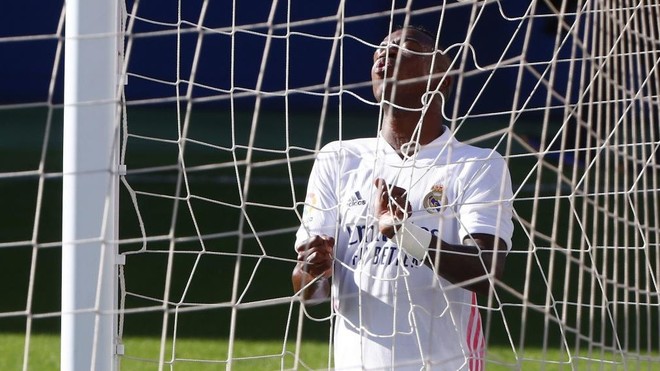