Both Leeds and Arsenal were left to rue missed chances after settling for a 0-0 draw at Elland Road – but it was arguably the hosts who should have felt more aggrieved.

Since winning promotion back to the Premier League, Leeds have already shown they can compete against some of the bigger teams in the division. Their first challenge after the international break was to take on an Arsenal side who, like Leeds, had lost by three goals in their last game before the pause.

Arsenal gave a first Premier League start of the season to Joe Willock in midfield. There was likewise a first league start for Leeds summer signing Raphinha.

The latter had the first chance of the match, but his effort went off target. The same went for Arsenal’s first shot, as Dani Ceballos fired wide from the edge of the box.

It was Leeds who put on more pressure in the first half overall, with Raphinha swinging another effort wide in one decent chance.

The hosts then worked Bernd Leno better than they had before. Patrick Bamford forced a save from the Arsenal keeper on the half-hour mark.

Next, Stuart Dallas pulled a shot wide after another Leeds counter attack. Jack Harrison’s cross eventually landed at his feet as he snuck in towards the far post, but he could not divert his shot on target.

Leeds continued their momentum but without dealing a decisive blow when Mateusz Klich curled a shot wide five minutes before the break.

Arsenal began to remind Leeds of the threat they could pose towards the end of the half, with Nicolas Pepe having a go from outside the box after dribbling through the defence. But just like their hosts, they could not convert their pressure into a goal.

Mikel Arteta knew Arsenal needed to change something, so he replaced Willian with Reiss Nelson at half-time.

Arsenal navigate second half with 10 men

But the second half got off to a far from ideal start for Arsenal, when Pepe was sent off for putting his head to Ezgjan Alioski off the ball. After a quick VAR check, the referee had little choice but to give him his marching orders.

Arsenal still kept probing despite going down to 10 men, but once again, Leeds had the better of the chances.

A good one came in the 70th minute as the hosts worked the ball into the box, but it fell to the wrong player. Defender Luke Ayling could not react in time to get a proper shot away.

The pressure kept building, though, and the next chance came the way of someone more accustomed to being in attacking positions. Bamford missed with a header after a cross from Raphinha on the right.

Arsenal had an opportunity when they won a free kick around 30 yards out. Granit Xhaka had a go, but his effort went over.

At the other end, Leeds went their closest yet. Two summer signings combined, as Robin Koch brought the ball out of defence and fed it into Rodrigo Moreno. The striker took a couple of touches before curling the ball goalwards, only for it to crash against the crossbar.

Arsenal were appealing for a penalty when Pierre-Emerick Aubameyang’s shot hit the arm of Liam Cooper. However, VAR did not intervene as the impact was perhaps too close to the initial effort.

They then had a golden opportunity to punish Leeds for their missed chances. But they too failed to make the most of their best one.

Hector Bellerin brought the ball forwards before expertly picking out Bukayo Saka. The wide man tried to round Illan Meslier, but the Leeds keeper managed to push his shot away.

Leeds hit the woodwork again as the game entered its final five minutes. After an inswinging cross, Bamford headed the ball into the ground – but it struck the post.

Even after five minutes of stoppage time, and with Leeds hitting the post again, neither side could break the deadlock. Hence, they both remain in the bottom half of the table after nine games.

It marks Leeds’ third clean sheet of the season, and their first at Elland Road. It is also the third time in the Premier League this season that Arsenal have shut out their opponents.

In truth, though, both teams will be left wishing they could have been more clinical in the final third.

Sun Nov 22 , 2020
Leeds United 0-0 Arsenal: Gunners hold toothless Whites despite Pepe red card Bernd Leno produced an inspired display as Arsenal secured a point against a Leeds side that wasted a host of chances. Nicolas Pepe was sent off but Bernd Leno frustrated wasteful Leeds United with a string of fine […] 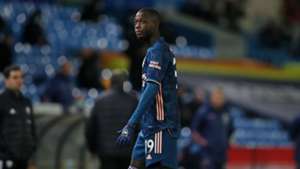