Diogo Jota kept up his record of scoring in each of his home league appearances for Liverpool as they ended Leicester’s 100% away record with a 3-0 win.

Jota scored the second goal after an own goal from Jonny Evans had given Liverpool the lead in the first half. Roberto Firmino added a third late on to make it 64 Premier League games at Anfield in a row without defeat – a new club record in the top flight.

There was much talk in the buildup about who would play at centre-back for Liverpool, with Jurgen Klopp potentially having to call on a younger player like Nat Phillips.

However, the Reds boss was able to use senior players Joel Matip and Fabinho alongside each other as the pair to combat Jamie Vardy and co.

More of the early action, though, was at the other end of the pitch. First, Curtis Jones forced a save from Kasper Schmeichel from a tight angle.

A few minutes later, Firmino set up Jota, who fired the ball towards goal in an effort to continue his scoring run at Anfield. However, Schmeichel saved once again.

There was nothing Schmeichel could do to prevent Leicester going behind in the 22nd minute. As a corner came in from the right, Evans tried to stop Sadio Mane getting to it – but the ball came off the back of the Leicester defender’s head and went into the net as an own goal.

Liverpool almost doubled their lead instantly, when Jota and Firmino bundled the ball in between them. However, they impeded Schmeichel in the process, so it was a free kick to the Leicester keeper instead.

At the other end, Leicester should have equalised. Harvey Barnes played a one-two with Vardy on his left, but his finish lacked composure and went wide.

As half-time approached, Liverpool doubled their lead. Andy Robertson found himself in acres of space on the left wing, before beating Marc Albrighton and sending a cross in.

Jota was there to head home, bringing up an impressive record in the process. The Portuguese forward has become the first player ever to score in each of his first four league appearances at Anfield for Liverpool.

As well as an individual record for Jota, the goal also set a team record for Liverpool. The 30 passes in the buildup were the most they have made for a goal in the Premier League since Opta began collecting data in 2006.

30 – Diogo Jota’s goal for Liverpool came after a sequence of 30 passes; since Opta have this data available from 2006-07, this is the most in the build-up to any @premierleague goal by the Reds. Silky. pic.twitter.com/SQXNDLRYEG

The champions had to make a change early in the second half when Naby Keita picked up a knock. Neco Williams came on at right-back, allowing James Milner to move into midfield.

Milner instantly made an impact from his more advanced position, threading a through ball into Sadio Mane. Schmeichel palmed away the winger’s subsequent effort, before Christian Fuchs averted the danger caused by Jota trying to get on the end of a rebound.

Jota then turned provider in setting up Firmino for a double chance. The Brazilian headed against the post, though.

At the other end, another Brazilian made a vital intervention for Liverpool. Vardy got in behind the defence after a free kick – although he looked to be in an offside position – only for Alisson to smartly thwart him.

While Liverpool have been in very good form recently, one man who has been struggling – not for the want of trying – is Roberto Firmino. The forward’s luck was best summed up in another double chance with 15 minutes to go.

He somehow hit the post after going in one-on-one with Schmeichel, before his strike on the rebound was cleared off the line just one centimetre before it would have gone in.

Roberto Firmino won’t get any closer to scoring… ⚽️

Firmino finally got his goal in the last five minutes, though, as he headed a corner into the far-post – prompting huge smiles from himself and his teammates.

It proved to be the final goal of the game, securing Liverpool’s new record. They also kept a clean sheet at the other end, which was a fitting way to mark their first game since the passing of Ray Clemence.

Liverpool overtake Leicester in the table as a result, moving joint top with Tottenham. 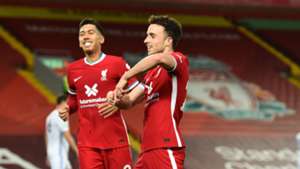