Edouard Mendy has returned to Chelsea after suffering an injury while on international duty with Senegal.

Mendy has enjoyed a meteoric rise to prominence since joining Rennes from Reims in the summer of 2019.

The 28-year-old shot-stopper helped the Ligue 1 outfit qualify for the Champions League for the first time last season, attracting the attention of Premier League giants Chelsea in the process.

The Blues forked out £22 million ($28m) to bring the Senegalese ‘keeper to Stamford Bridge on September 24, tying him down to a five-year contract.

Mendy has been quickly thrust into the limelight in west London, featuring in a penalty shoot-out defeat to Tottenham in the EFL Cup before replacing Kepa Arrizabalaga in Frank Lampard’s starting XI for a Premier League meeting with Crystal Palace on Saturday.

The former Rennes star recorded his first clean sheet as Chelsea ran out 4-0 winners, and generally impressed throughout the 90 minutes in terms of his handling, distribution and command of the box.

Calls for Mendy to take Kepa’s spot as the Blues No.1 on permanent basis have been widespread since then, but he could now be a doubt for a clash with Southampton on October 17.

The in-form keeper had been training with Senegal after being called up for an international friendly against Morroco on Friday, but has been forced to return to England after sustaining a thigh injury, which will now be assessed by Chelsea’s medical staff.

The Senegalese Football Federation confirmed the news via an official statement, which reads: “The Senegalese Football Federation announces the goalkeeper of the National Selection Edouard Mendy sustained an injury to the right thigh that occurred during the training session on Wednesday, October 07, 2020 and has undergone a medical examination at the hospital in Rabat.

“Edouard Mendy has also left the group this afternoon to return to his Club (Chelsea) where he will undergo further examinations.

“The Senegalese Football Federation wishes him a speedy recovery.

“He will be replaced by the young goalkeeper of the U20 national team, Boubacar Fall, who was regrouping in Toubab Dialao and who moved to Rabat in the early evening.”

Southgate: Calvert-Lewin's goals take him to another level

Thu Oct 8 , 2020
The 23-year-old scored in his first appearance for the Three Lions and the coach was pleased with the threat he posed throughout the game Gareth Southgate was impressed by Dominic Calvert-Lewin’s goalscoring debut for England in their 3-0 win against Wales on Thursday. Calvert-Lewin headed in the opening goal of […] 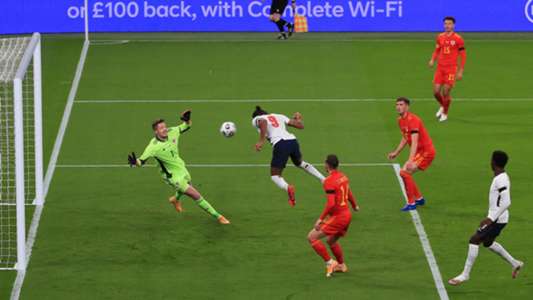