The former Blues winger is delighted to see a highly-rated coach commit to a new contract, with a stunning transfer now expected to be pushed through

Lionel Messi making a move to Manchester City is “inevitable” now that Pep Guardiola has committed to a new contract with the Blues, says Trevor Sinclair.

A highly-rated Catalan coach has penned fresh terms at the Etihad Stadium through to the summer of 2023.

With any uncertainty regarding his future removed, City are now free to focus on putting the pieces in place that will allow recent success to be maintained.

That could include launching an audacious bid to bring Barcelona superstar Messi onto their books.

The six-time Ballon d’Or winner is due to become a free agent in 2021, having seen a move away from Camp Nou blocked in the last transfer window.

City have the funds in place to complete a stunning deal and Sinclair believes the Argentine icon will be soon be reunited with former Barca boss Guardiola.

The ex-City winger told talkSPORT of fresh terms for a proven tactician and the impact that could have at the Etihad: “I think every City fan is going to be buzzing when they hear this news.

“Not only has he won the trophies, but you think about 100 points, the treble, winning back-to-back Premier League titles…

“And just the fact he can recruit any player in the world excites Man City fans. The relationship between him and Khaldoon [Al Mubarak], the owner, has been superb and there is a lot of trust there.

“And I think he is happy for the journey to continue.

“For me, you look at what has gone on with him signing a new two-year contract, there are rumours Kevin De Bruyne is going to sign a new contract… I think Messi is inevitable.

“I can’t see anything other than that. And I look at the club I supported, ‘little old Manchester City’, signing the best player in the world and possibly winning the Champions League…”

Sinclair added on an approach for Messi, with the 33-year-old South American free to discuss pre-contract terms with his many suitors from January: “I can’t see it any other way.

“He is too young to go back to Argentina, and I don’t think there is any other club where they have the right manager in place where Messi would go in and feel comfortable under that manager.

“I feel it is inevitable it is going to happen… and I can’t wait for it to happen!”

Fri Nov 20 , 2020
Arsenal owner Stan Kroenke has reportedly agreed to a significant period of first-team investment to turn the club into a Premier League force again. Gunners boss Mikel Arteta has done magnificently to lift the gloom left behind by his predecessor Unai Emery. Indeed, Arteta has already brought in the FA […] 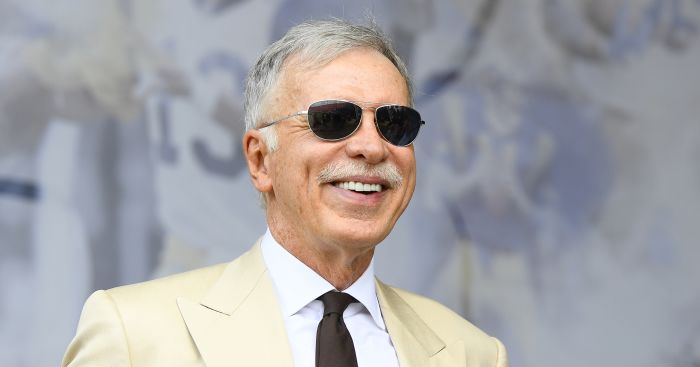