Thomas Muller says he’s open to a return to the Germany squad, with Joachim Low being urged to recall the Bayern Munich icon after a 6-0 thrashing at the hands of Spain.

Germany missed out on qualification for next year’s UEFA Nations’ League finals after being dismantled by Spain at La Cartuja Stadium in Seville on Tuesday.

A Ferran Torres hat-trick and goals from Alvaro Morata, Rodri and Mikel Oyarzabal gave La Roja a comprehensive victory which saw them finish top of League A, Group 4 on 11 points.

Low’s position in the dugout has been called into question after Germany’s worst competitive defeat in 89 years, while there has also been a clamour for exiled stars to be brought back in from the cold ahead of the 2021 European Championships.

Ex-Die Mannschaft boss Jurgen Klinsmann has been among those to suggest Muller still deserves a place in the international set-up, as he told ESPN last week: “The team lacks a leader, it’s sad to see.

“It lacks a personality that after the second or third goal sends out some signals, does something, does a foul, interrupts the game, gets in the face of the Spanish players, and that raises the big question about Thomas Muller.

“Muller is a leader. He’s the leader of the pack at Bayern Munich still because he keeps the young players in line. Leroy Sane, Serge Gnabry… they all follow Thomas Muller on the field and that’s why Bayern is unbeaten in I don’t know how long in the Champions League.

“It’s a big problem for Germany when we’re just six or seven months out from the Euros.”

Muller, who won 100 caps for his country before being axed from Low’s squad alongside Mats Hummels and Jerome Boateng in March 2019, has now come out to address the possibility of reviving his international career.

The Bayern star told Sky Germany of the pain he felt after the Spain humbling: “That certainly hurts. Of course, you suffer for your team-mates in the club, with the players you know, with whom you have played – and also a little with the spectators.

“As I said, none of us (he, Boateng and Hummels, the editor) has resigned.”

Muller was speaking after Bayern’s 1-1 draw with Werder Bremen in the Bundesliga on Saturday, which allowed arch-rivals Borussia Dortmund to close the gap on them at the top of the table to just one point.

The 31-year-old will be back in contention for a place in Hansi Flick’s starting XI when the defending European champions take on Red Bull Salzburg at the Allianz Stadium on Wednesday.

Sun Nov 22 , 2020
Ian Wright believes football’s lawmakers should prevent penalty takers such as Bruno Fernandes from jumping in their run-ups. Manchester United midfielder Fernandes is an infamous advocate of the tactic, often to great success. But while the method often works, Wright has suggested that it also causes confusion for goalkeepers. Fernandes […] 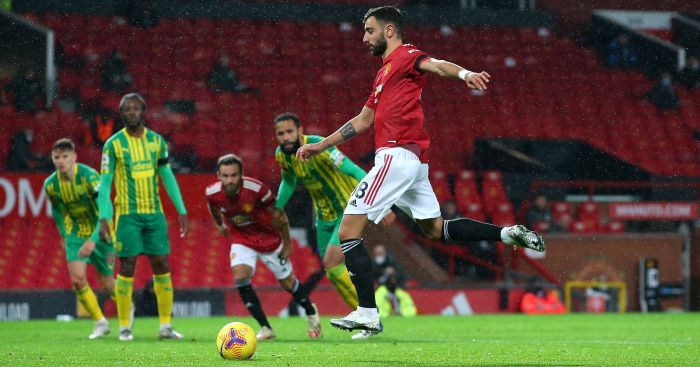