Rafael Nadal knew that if he lost at the Nitto ATP Finals on Thursday evening, his season would be over. And the Spaniard battled hard to beat defending champion Stefanos Tsitsipas 6-4, 4-6, 6-2 and earn a semi-final spot. Tsitsipas was eliminated from the season finale.

Nadal is into the semi-finals at this event for the sixth time as he continues his pursuit of a maiden title at the year-end championships. The World No. 2 tallied a 2-1 record to claim second place in Group London 2020 behind Dominic Thiem.

“[To] be in the semi-finals here, in the last tournament of the year, is an important thing,” Nadal said in his on-court interview. “[I am] happy for that and I am looking forward to the semi-finals against Daniil [Medvedev].”

One year ago, Nadal battled past Tsitsipas in the final round-robin match after two hours and 52 minutes, but the lefty was still ousted from the tournament. This time, he only needed a win to move on, and despite a slip at the end of the second set, he emerged victorious after two hours and five minutes to extend his ATP Head2Head lead against the Greek to 6-1.

Nadal has now won 71 consecutive matches after winning the first set. He will next play Daniil Medvedev in a rematch of the 2019 US Open final.

There was little to differentiate between Nadal and Tsitsipas early on, as both men cruised through their first three service games with impressive serving and first-strike tennis. But slowly, it was the Spaniard who began to dig his teeth into the Greek’s service games.

Nadal made it clear that he wanted to work rallies to attack the 2019 champion’s backhand with his own forehand. Tsitsipas was not entirely in rhythm on the backhand wing, and he made an error into the net to face break point. The five-time ATP Tour titlist then double faulted to give the lefty the advantage.

The second seed cruised through the rest of the opener, pounding an ace to move within a set of the semi-finals. Tsitsipas expected adversity, though, saying on Tuesday that, “I know it will require a lot of physical effort, and I’m going to have to go through a lot of pain and suffering.”

The 22-year-old took care of his service games to hang in there with Nadal, who won four of his first nine service games at love. His backhand began firing, as he ripped a short-angled winner to save an early break point.

As the match wore on, the tone shifted. From relatively easy holds for both players, suddenly service games became more laborious, and Nadal hit his first double fault of the match to give the Greek the set.

“I think I played quite well for such a long time,” Nadal said. “That game at 5-4 in the second [set] affected [the match] a little bit. I lost the second [set] and then I was able to have the break in third [set] earlier, but then he broke me back.

“I thought I was winning my serves quite comfortably until that moment. After that, everything changed a little bit. I think I started to serve a little bit worse but, in general terms, it [was] a very positive match for me.”

The decider opened up with three consecutive breaks, and Nadal dug out of a 0/30 hole at 2-1 before holding with good serving. Tsitsipas misfired on an inside-out forehand to give Nadal an insurance break, and that’s all the Spaniard needed, finishing off his win with a backhand winner up the line.

Tsitsipas was trying to become the second-youngest player to defend his Nitto ATP Finals title. Lleyton Hewitt accomplished the feat at 21 years old in 2002. Only Ilie Nastase has lifted the trophy at the season finale in his first two appearances. The Greek finishes his season with a 29-14 record.

Did You Know?
Nadal owns the tournament record for most consecutive qualifications (16). The Spaniard has earned his spot at the Nitto ATP Finals each year from 2005-20.

Ancelotti: James Rodriguez gets fit by playing games, that's where it went wrong for him at Real Madrid 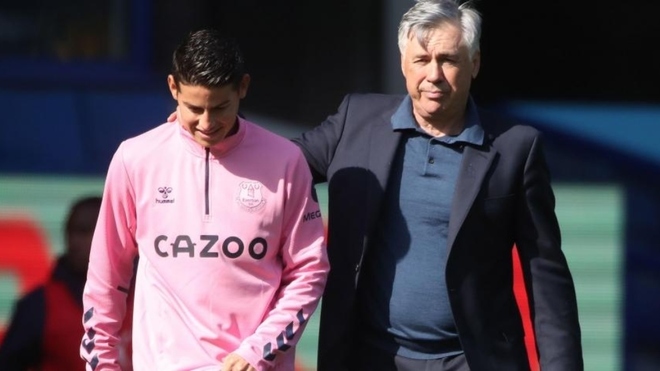