The Mailmen started the season on a high but went on to struggle and by the time the season was annulled, they were in 11th position with 30 points that came from the 23 games they had played. However, the former Kenya international is confident this time around it will be different.

“Last season we had no problem with the way we started,” Omollo told Goal on Sunday.

“Our main problem was on the way we finished and it happened because we did not have strength on the bench. Remember, I did not have the privilege of recruiting players we wanted, but this time around it is not the case.

“With the kind of players we have, I am confident we will not suffer the same way we did in the 2019/20 season.”

The 51-year-old had set a target of finishing in the top eight positions in the abandoned campaign. However, this time around, he believes it will be better since his charges have enough quality.

“I do not want to say I want a top-eight finish, one thing for sure is that it will be better,” Omollo continued.

“We are more competitive and hungry for success and I am sure we will deliver. We will give our best.”

On Saturday, the team played two friendly games; Ezekiel Okare helped them to a 1-0 win against Nairobi City Stars.

Against Gor Mahia, the Mailmen, once again, started strongly and their efforts paid dividends when former Ulinzi Stars forward Elijah Mwanzia connected a rebound. K’Ogalo looked lost and were uncharacteristically off colour.

“I am satisfied with my players because we are developing with every match,” Rangers coach Omollo told Goal after Saturday’s game.

“We drew 0-0 with Tusker FC in our initial pre-season friendly, before registering a 1-0 loss to Gor Mahia. However, we have rectified our mistakes and you could see on the pitch.

“My defense was strong throughout and we managed to keep a clean sheet. Gor Mahia are a tough team and when you get a win plus a clean sheet against them, definitely it shows we are doing okay.

“I feel we are ready for the start of the season.”

Sun Nov 22 , 2020
Barcelona’s faltering start to the season was thrown into further chaos as the Catalan giants lost central defensive talisman Gerard Pique to injury in the 1-0 defeat to Atletico Madrid. The incident occurred when Angel Correa fell on Pique after a challenge from Jordi Alba. Looking in pain, Pique was […] 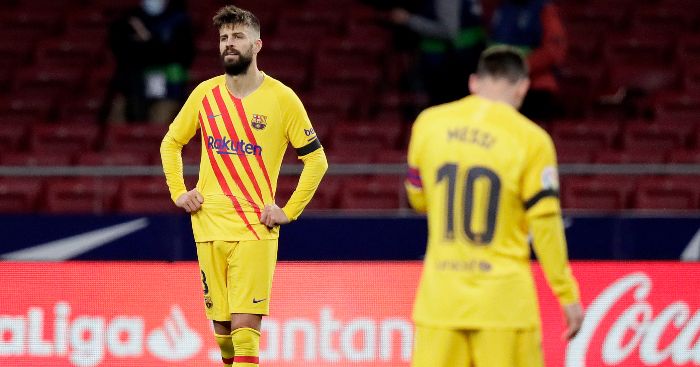