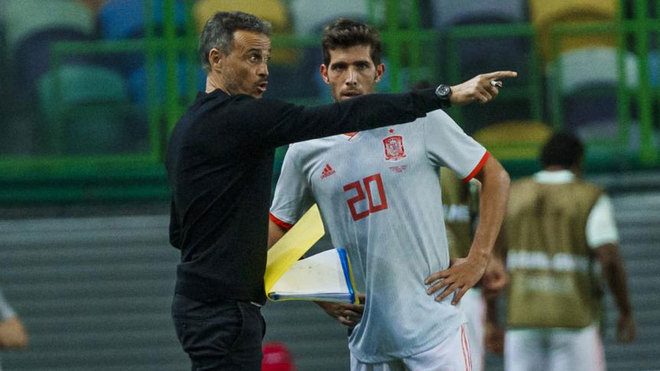 Luis Enrique came away with a 0-0 draw in Spain’s friendly against Portugal on Wednesday night which saw numerous new faces in the side, as well as tactical changes.

The head coach of La Roja singled out one man in particular for post-match praise for a blistering cameo in the second half.

Adama Traore made his long awaited senior bow for Spain, and showed what he can offer the team with his blistering pace and skill down the right flank.

“Adama was Adama in his purest form and that’s how we want him to be” he stated after the game.

“He has the ability to take on opponents, and gave a killer pass to Dani Olmo that didn’t end up going in.

“With a player like that, they will not be able to stop him, they will have to use two players.”

Spain were dominant early on, although that control slipped later on in the game.

“The first half, the first 30 minutes were exceptional, with and without the ball, we pressed very well,” he said.

“In the second, it was more even and their chances arrived in transitions. I liked the rhythm [of the team].

“Some suffered knocks and I wasn’t able to manage them like I wanted.”

The star of recent international matches, Ansu Fati, didn’t make it on the field but Luis Enrique explained why.

“He’s been playing many minutes for Barcelona and today he was going to play but I had to make changes and we wanted to enter the game with blocks.

“He will take part in the next [games].”

Sergio Reguilon started at left-back but had to come off at half time for Jose Gaya due to injury, but the boss assured it was nothing to worry about.

“[It was] nothing serious, a knock and let’s see how he gets up tomorrow.”

Wed Oct 7 , 2020
Stefanos Tsitsipas says that he’s a “proper adult” now, ready to excel in his second Grand Slam championship semi-final. The 22-year-old, who reached his first major semi-final at the 2019 Australian Open (l. to Nadal), now feels that he is better placed to make the most of the opportunity at Roland […]