Black Leopards secured their maiden win of the 2020/21 season when they defeated Maritzburg United at Thohoyandou Stadium in Limpopo.

Rodney Ramagalela started for Leopards after rejoining the Limpopo side in midweek after being released by TS Galaxy last month.

English coach Dylan Kerr was taking charge of his first match as Leopards head coach after being reappointed earlier this week.

On the other hand, Sebastian Mwange and Fares Hachi made their debuts for Maritzburg, who were looking to record their maiden win of the season.

The two teams attacked each other in the first half, but they could not find the back of the net and the score was 0-0 at the interval.

The deadlock was finally broken 11 minutes into the second-half and it was Ramagalela, who marked his second debut for Lidoda Duvha with a goal.

The former Mamelodi Sundowns marksman was set-up by Lifa Hlongwane and he beat Zambian goalkeeper Mwaange in the Maritzburg goal-posts to make it 1-0 to Leopards.

Ramagalela’s solitary goal earned Leopards a narrow 1-0 victory over Maritzburg and it took the Limpopo side to 13th spot on the league standings.

It was Maritzburg’s fourth successive defeat in the league this season and they remained 16th on the table.

Meanwhile, Stellenbosch FC returned to winning ways when they secured a victory over Chippa United at Danie Craven Stadium in the Western Cape.

Stellies were wounded after suffering a 1-0 defeat to SuperSport United before the Fifa break, while Chippa had recorded their first win of the season when they defeated Maritzburg 3-1 on November 3.

The deadlock was broken 21 minutes into the game and it was Argentine playmaker Junior Mendieta, who scored with a header from Marc Van Heerden’s cross to make it 1-0 to Stellenbosch.

The score was 1-0 to Stellenbosch at the interval and they continued to attack after the restart as they looked to double their lead.

Stellenbosch’s 2-0 win over Chippa was sealed by Nathan Sinkala, who netted his second goal of the season in the 86th minute with debutant Phathutshedzo Nange grabbing an assist.

The win took Stellies to eighth spot on the league standings, while the Chilli Boys slipped down to 11th place on the table.

Lastly, Swallows FC remain undefeated in their return to the elite league after drawing with PSL debutants TS Galaxy at Dobsonville Stadium in Soweto.

The two teams struggled to create clear-cut chances in the first half and the score was 0-0 at the interval.

A quite second-half followed with the Birds having introduced Kaizer Chiefs loanee Given Thibedi, while former Bidvest Wits hitman Mxolisi Macuphu was introduced by Galaxy coach Dan Malesela.

Both teams launched late attacks in search of a goal, but it never came and ultimately, the match ended in a 0-0 draw on the night.

The result saw Swallows climb to the top of the league standings – leapfrogging Orlando Pirates, while Galaxy moved up to sixth spot.

Sat Nov 21 , 2020
The Catalan was left frustrated while adding that the opposition followed their gameplan perfectly Manchester City manager Pep Guardiola reflected on how his side failed to break down Tottenham on Saturday, adding that Spurs played in a manner that is very reflective of manager Jose Mourinho. Mourinho and Spurs got […] 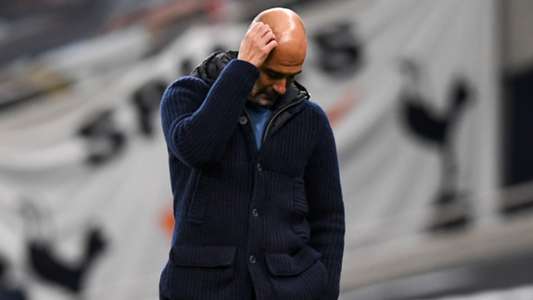