Despite all the differences between Roland Garros as we know it and the 2020 version, moved to the end of September due to the COVID-19 pandemic, Carlos Moya knows one thing for certain, which he underlined several times during his conversation with ATPTour.com: the combination of Rafael Nadal, Paris’ terre battue and Court Philippe-Chatrier is a significant foundation on which to build another bid for the Coupe des Mousquetaires.

Is the bubble a struggle?
No, we’re keeping ourselves entertained. Watching series’, reading, playing Ludo… Going out to dinner gives you fresh air, but we’re getting used to how it is. If they told us this two months ago, we’d have seen it as an ordeal. Now, we understand that the situation requires it. It is what it is, we’ve come to play and to try and win. We spend the free time we have in the best way possible, but we have to be thankful that we can play the tournament.

How’s it going so far?
You can always use to first week to gradually find your form, pick up matches and get into the tournament. He’s got through every round without difficulty, playing well, growing into it. It’s been a pretty good week. We’ll see how it goes from now on.

Is it good or bad not to have struggled at all?
I believe in reaching the final rounds as fresh as possible. This is a marathon. If you’re tired after the first 20 kilometres it’s difficult to make the final push.

Did the defeat in Rome hurt him a lot?
Obviously, it’s a new situation. Coming to Paris without having won any tournaments in recent months… I think that had never happened before. He’s had to deal with that. I was sure it wouldn’t be a problem, and that’s been the case so far. He barely remembers the Rome match, but it served as a reminder to us that we have to tread carefully, even though he’s playing well.

How many times have you told him that he had to be positive?
From the start.

What were your first impressions of Roland Garros this year?
We’ve been training in Manacor for a few months with these balls, in the heat. We didn’t realise that the ball was very different to what he’s used to at Roland Garros. But we did think the weather would be better, we weren’t expecting it to be this cold. If you play with a little sun you don’t notice it, but those balls together with the cold, humidity, rain… it means they don’t spin as much..

So what do you do?
In the end, there’s one thing that’s very clear: Nadal has to play to the conditions at this Roland Garros. If it’s dry and the ball is bouncing high, great, let’s go for it. If the ball doesn’t bounce and that favours more aggression — because he’s not going to lose control of his shots — then we have to be more direct.

Has he changed the way he is playing?
A little, yes. This Roland Garros forces you to speculate less. The clay, with his game and if the ball bounces high, it allows you to speculate a little more if you’re not feeling confident. You hit it in, let it bounce and see if they beat you. This year, they’ll beat you if you do that, without a doubt. Mentally, you have to make an effort for every shot to make sense. To do it the easy way: when he’s in a position to attack, he has to attack instead of letting the ball bounce, his shots have to go deep.

Does having won the title 12 times always make him the favourite, whatever happens?
No, not always. I don’t know what will happen next year. If Thiem wins all the tournaments on clay, Thiem will be the favourite. We have an important trump card: he’s Rafa Nadal, we’re at Roland Garros and we’re playing on Court Philippe-Chatrier. History can be useful. He’s won here in every situation possible.

Is that the message?
We’ve been talking about it from day one: he’s won in the sun, in the rain, in snow, at altitude, at sea level… there are some conditions that favour him more and others less, but he’s managed to win tournaments in thousands of situations throughout his career. Rafa has an ability to adapt that nobody else does.

Novak Djokovic and Dominic Thiem seem to be his biggest rivals at the tournament. Who do these conditions favour the most?
The former, Djokovic. I don’t think they benefit Thiem too much. In theory, I think it benefits him when everything is a little faster. Thiem, playing against Rafa, maybe he doesn’t prefer it to be fast, but he does against Djokovic. It’s just conjecture.

Would you agree that one of those three will win the title?
They’re the main favourites, but there are others who are playing well. I don’t think there will be any surprises in terms of the winner here. To me, it wouldn’t be a surprise if Tsitsipas, Rublev or Zverev won the tournament. There are three who are bigger favourites than the rest, but I wouldn’t consider it a huge surprise if it happened.

Sun Oct 4 , 2020
Barcelona Former colleagues with Dutch national team Barcelona will go into the October international break after hosting Sevilla at the Camp Nou, just as they did last year. Back then, Ernesto Valverde’s side ran out 4-0 winners over Los Rojiblancos, although Luuk de Jong missed three clear chances to score. The […] 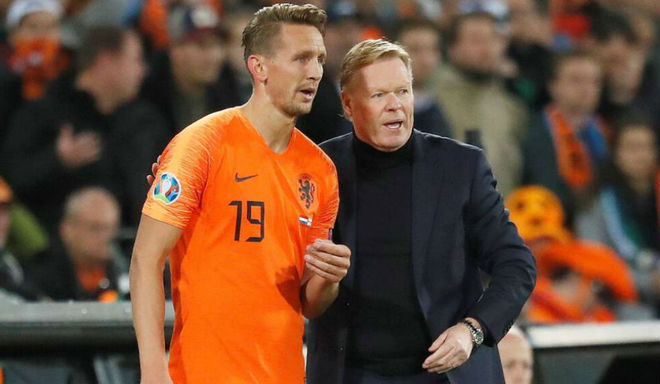