The defending Roland Garros champion Rafael Nadal feels like the king in his kingdom again in Paris, despite challenging conditions. The Spaniard is through to his 42nd Major quarter-final and the 14th at Roland Garros following another straight-sets triumph over Sebastian Korda on Sunday, becoming the third player in the Open era with 14 quarter-finals at a single Major.

To achieve that many last eight appearances on the biggest tennis stage is respectable, but to reach the quarter-final stage at a single Major is a feat reserved only for the greatest champions. Jimmy Connors did that at home in New York, entering the last eight at his beloved US Open 17 times!

The American added 14 quarter-final runs at Wimbledon, waiting until Roger Federer to get a company on the list. The Swiss has played in 17 Wimbledon quarter-finals since the first one in 2001, with 15 more at the Australian Open.

As we already said, Rafael Nadal joined the party on Sunday, beating Sebastian Korda 6-1, 6-1, 6-2 in an hour and 55 minutes to become the third player with 14 quarter-finals at one Major. Making a debut in Paris in 2005, Nadal lost before the quarters only twice, winning 97 out of 99 matches and hoping to lift the 13th crown on Sunday.

Rafa saved five out of six break chances to mount the pressure on Korda, securing eight breaks to march into the quarters without losing a set. Nadal fended off two break chances in the first game with service winners to avoid an early setback.

Korda netted a backhand to find himself 2-0 down against his childhood idol before Nadal secured the third game with a volley winner at the net for a 3-0 advantage. Losing ground after a promising start, Sebastian hit a double fault to give serve away in game four, allowing Rafa to forge a 5-0 lead with a forehand winner.

Rafael Nadal is the third player with 14 quarter-finals at one Major.

The American held at love with a service winner to finally add his name on the scoreboard, only to hand the set to Nadal who held after deuce for 6-1 in 37 minutes.

Korda sprayed a forehand error to lose serve in the second set’s first game, with Rafa confirming the lead with a hold at 15. The youngster sent another backhand wide to suffer another break at 1-3, serving to stay in the set following a hold at 15 from Nadal.

The Spaniard clinched another break thanks to his opponent’s forehand mistake, moving 6-1, 6-1 up after 69 minutes. With nothing to lose, Korda grabbed a break in the third set’s first game, holding after two deuces to settle into a nice rhythm and extend his chances.

Shifting into a higher gear, Nadal claimed the remaining games, bouncing back in style and sailing into the quarters. He pulled the break back in game four, held at love and broke at love to forge a 4-2 advantage. Facing two break points at 5-1, Nadal repelled both and sealed the deal with the third straight break in game eight, securing another Major record.

Real Madrid: Odegaard: My return to Real Madrid was natural, there was no falling out with Real Sociedad

Tue Oct 6 , 2020
Real Madrid Cut two-year loan short this summer Odegaard Chema ReyMARCA Martin Odegaard has revealed how he’s adapting to life back at Real Madrid this season. The midfielder has been recalled from his loan at Real Sociedad after an outstanding season in San Sebastian. Now, after featuring in Real Madrid’s opening […] 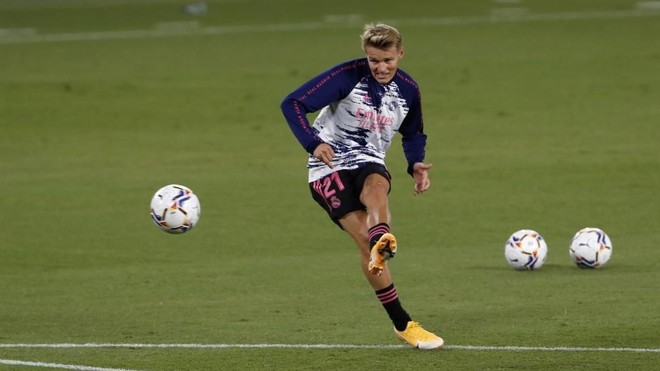