World no. 2 and the 12-time Roland Garros champion Rafael Nadal will have the opportunity to chase the 13th Parisian crown on Sunday. The great Spaniard took down Diego Schwartzman 6-3, 6-3, 7-6 in three hours and nine minutes, improving his perfect score in Roland Garros semi-finals to 13-0!

It was the tenth victory for Nadal over Schwartzman in 11 encounters, avenging that quarter-final loss in Rome and advancing into the title clash against Novak Djokovic or Stefanos Tsitsipas. Nadal will compete in the 28th Major final, moving closer to Roger Federer (31) and embracing his third streak of at least four title matches in Paris.

At 34 years and four months, Nadal became the third-oldest Roland Garros finalist in the Open era behind Andres Gimeno and Ken Rosewall who achieved that 50 years ago. As was expected, Rafa had to work hard against Diego, opening a 6-3, 6-3, 4-2 advantage before he started losing ground, surviving a tough service game at 5-5 and sealing the deal in the tie break to reach the final without losing a set.

Nadal saved nine out of 12 break chances, controlling the pace in his games until the second part of the third set and delivering six breaks that carried him through. Rafa had the upper hand in the shortest and mid-range exchanges, playing aggressive tennis than saw him hitting 40 winners and 35 unforced errors.

Nadal built the advantage early in the opening set and kept it throughout it, delivering 16 winners and 11 unforced errors and playing almost perfect tennis at the net. The Spaniard was the more aggressive player, hitting the ball early and forging the advantage in the shortest range up to four stokes.

Nonetheless, he had to work hard in the opening game, fending off two break chances and bringing it home with a backhand crosscourt winner after 13 minutes for a significant boost. The Argentine netted a backhand in game two to suffer a break, pulling it back in the next game following a loose backhand from Nadal.

Rafael Nadal is through to his 13th Roland Garros final.

The defending champion grabbed a break at 15 in game four to forge another lead, fending off a break chance in the next one with an ace down the T line and holding after three deuces for a 4-1 advantage after 40 minutes!

Schwartzman produced comfortable holds in games six and eight but couldn’t create more break chances, as Rafa held at 5-3 after two deuces to wrap up the opener in 65 minutes. Carried by this momentum, Nadal served at 80% in set number two, dropping four points behind the initial shot and mounting the pressure on the other side of the net.

Diego did his best to overpower the rivals and hit more winners, achieving that but spraying too many errors and giving serve away twice. After two holds at love on each side, Nadal earned a break in game three following a backhand error from the Argentine, forcing a mistake from the opponent in game four to build a 3-1 advantage.

Schwartzman survived three break points in game seven that could have pushed him further behind, winning five straight points to remain within one break deficit and leaving Rafa a bit frustrated after missing his opportunities.

Still, the Spaniard didn’t think about it for too long, holding at love in game eight and closing the set with another break at 5-3 that sent him closer to the finish line. Returners couldn’t do much in the opening three games of the third set before Nadal clinched a break at love to open a 3-1 gap.

Instead of building on it, Rafa played a loose service game to suffer a break when his forehand landed wide, keeping the Argentine in contention but still looking good to seal the deal in straights. The Spaniard moved closer to the finish line with the second straight break at love that opened a 4-2 lead for him, only to squander it in another service game when his forehand sailed long.

Schwartzman held at 15 in game eight to level the score at 4-4, and there was no more room for errors for Rafa, who held at love to move 5-4 up. At 30-30 in the tenth game, Nadal produced two massive mistakes that could have cost him dearly in the rest of the clash, losing three of the previous four games and having to work hard to avoid set number four.

Landing a couple of tired shots, Nadal found himself 40-15 down in game 11, firing up his forehand to save those break points, fending off the third with a volley winner, bringing the game home after four deuces with a service winner for a massive hold.

Diego held at 15 in game 12 to reach the tie break that Nadal kicked off with two winners. The Argentine sprayed a smash error to find himself 4-0 down, sending a backhand long in the next one to push Rafa closer to the finish line. The Spaniard forced a mistake from his rival to create six match points, converting the first to sail into the final.

Fri Oct 9 , 2020
The Gunners boss has heaped praise on the teenager after seeing him handed his first international cap for England in the 3-0 friendly win over Wales Bukayo Saka has “evolved” as a player in recent months, according to Mikel Arteta, who says the Arsenal starlet is improving at a “crazy” […] 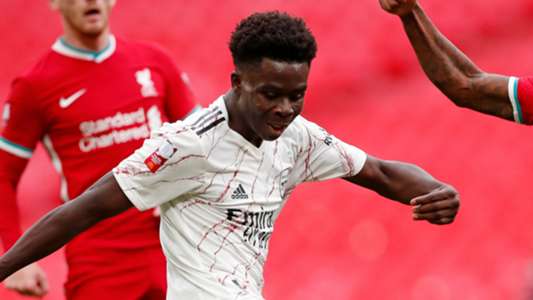