The veteran forward has apparently mended broken bridges at the Bernabeu, but Fabio Paratici does not expect him to leave

Ronaldo, 35, left Madrid in the summer of 2018 following nine trophy-laden seasons at the Santiago Bernabeu for a new challenge in Serie A.

The striker has gone on to win back-to-back Scudetti in his two seasons to date, scoring 71 goals in 94 games in all competitions.

Juve’s failure to repeat their domestic success in Europe despite the presence of the Champions League talisman, however, has caused some unrest in Turin, with neither Massimiliano Allegri nor successor Maurizio Sarri able to break the club’s run of 25 years without success in the competition so far.

Media reports from Italy suggest that Ronaldo, additionally frustrated by Juve’s efforts to cut players’ salaries to offset financial losses caused by the coronavirus pandemic, has made efforts to smooth relations with Madrid president Florentino Perez, leaving the door open to a possible comeback in the future.

Paris Saint-Germain are also mentioned as a potential destination for the striker, who started Juve’s Serie A clash on Saturday at home to Cagliari.

Paratici though insists that in spite of those stories, Ronaldo is going nowhere.

“I can reassure you about Cristiano Ronaldo’s future here at Juventus,” the director explained to DAZN.

“We don’t pay too much attention to transfers rumours, there is lots of news every day.”

Paulo Dybala is another players whose future in Turin has come under the microscope as the Argentine has struggled for playing time in 2020-21.

He was once again consigned to the bench on Saturday after missing out on Argentina’s World Cup qualifiers through illness, but Paratici expects him to get back to his best soon.

“Dybala is a great player and wants to be a protagonist. He’s unlucky, as he had this virus issue that has been dragging on since the last break for international duty, he had more problems just before the Lazio game,” he added.

“He has now been able to train regularly and hopefully will soon get back to being the Dybala of old.”

Sat Nov 21 , 2020
Man City boss Pep Guardiola cut a frustrated figure after bemoaning the manner of defeat his side suffered against Jose Mourinho’s Tottenham. Spurs rounded out 2-0 victors to temporarily take their place at the top of the Premier League table. Man City created the bulk of the chances in the match, […] 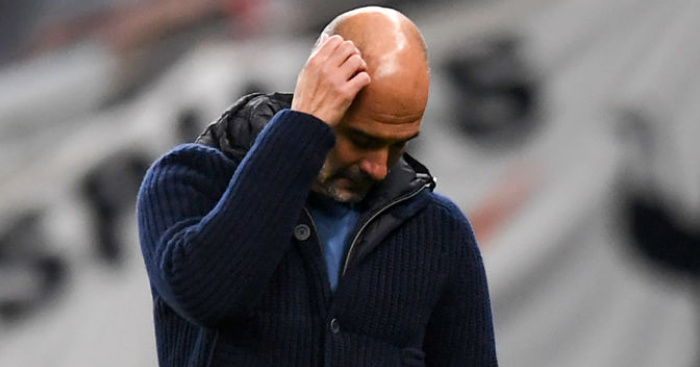