Aluko was handed his ninth league appearance and fourth start in the 2020-21 season and made the most of the opportunity.

The Super Eagles midfielder combined well with his compatriot Ejaria to score his first goal of the season for the Royals.

Anglo-Nigerian Solanke also got on the scoresheet in the encounter to inspire his side to secure a comeback win at the Vitality Stadium.

Reading raced into the lead only four minutes into the encounter through Lucas Joao’s well-taken penalty.

Aluko then doubled the lead moments before the half-time break, firing past goalkeeper Asmir Begovic after receiving a sumptuous pass from Ejaria.

Reading then took their foot off the pedal as Bournemouth launched an impressive comeback in the second half.

Former Liverpool forward Solanke ignited the comeback when he reduced the deficit with a fine strike in the 56th minute after he was set up by Lloyd Kelly.

Lewis Cook put Bournemouth in front for the first time in the game in the 77th minute before Solanke completed his brace moments before full-time.

Aluko featured for 64 minutes before making way for Michael Olise while Ejaria was replaced in the 74th minute by Ivory Coast international Yakou Meite.

Solanke featured for the duration of the game for Bournemouth while Nigerian midfielder Nnamdi Ofoborh made a cameo appearance in the encounter.

With the result, the Cherries climbed to the top of the Championship table with 23 points from12 games while Reading are second with 22 points from the same number of matches.

Sat Nov 21 , 2020
The current Manchester City boss was eager to buy into the Norwegian midfielder’s potential while calling the shots at the Allianz Arena Pep Guardiola wanted to make Martin Odegaard “the best player in the world” during his time at Bayern Munich, claims Jan Age Fjortoft, with the Catalan missing out […] 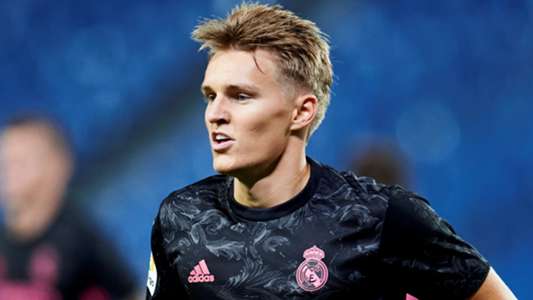