Diego Schwartzman will try to earn a career-defining win on Friday in the Roland Garros semi-finals against 12-time champion Rafael Nadal. If there’s anyone who knows what it’s like to step on the court in the 5’7” right-hander’s shoes, it’s 5’6″ Harold Solomon, the former World No. 5.

“I’m very intrigued watching him and I’m always impressed. I root for him all the time,” Solomon told ATPTour.com. “He can say what he wants about being a little guy, but it’s not easy being a little guy in a big guy’s world.”

Whenever Schwartzman is asked about his height, he points out that he’s had worse issues to deal with in his life than being a few inches shorter than other players. Solomon, a 22-time tour-level titlist, explained how the Argentine is able to overcome his size on court.

“If a big player with a huge serve is serving well, it makes it difficult for the smaller player. But the smaller player can make up for it,” Solomon said. “Diego is gifted in a lot of different ways. He’s exceptionally fast and he has exceptionally great anticipation. As I watch him play, he gets in and out of the corners so well. Maybe surprisingly to bigger guys, he’s not looking to hang 10 feet behind the baseline, but he’s looking to move up into the court to put pressure.”

Many times when players blast a ball to try to drive through Schwartzman, he returns the ball with interest.

“I think guys are making mistakes by giving him as much pace as they give him. I think that the sense is they think they can go in there and overwhelm him and knock him off the court, but the higher the ball is on a short guy, if you’re playing a really high, heavy ball that doesn’t have as much pace, I think it’s really hard,” Solomon said. “You have to do so much more work to generate pace off a ball that doesn’t have any pace. But I think these guys give Diego more pace, which is good for him, actually.”

Harold Solomon beats Guillermo Vilas at 1980 Roland Garros. Photo Credit: AFP/Getty Images
Solomon, who made the 1976 Roland Garros final, said that one of the best ways to play a shorter opponent is to drive them back with heavy topspin and then use that space to open up the court or draw them into the net.

“I’d much rather have Diego at the net than have him at the back, so how do you figure out a way to make him have to come into the net?” Solomon wondered. “When you’re that small, even though he’s fast, you’re susceptible to passing shots, so bringing him into the net on your terms is a great thing.”

Schwartzman faced a tough test in the Roland Garros quarter-finals against third seed Dominic Thiem, the recent US Open champion who reached the Paris final the past two years. When the Austrian is firing, he is one of the biggest hitters on the ATP Tour. Solomon noted that Schwartzman was the aggressor in their five-setters, while Thiem was content to remain neutral and hit a lot of backhand slices.

That heart helped Schwartzman earn one of the biggest victories of his career in the Internazionali BNL d’Italia quarter-finals against Nadal. The Argentine had lost his first nine ATP Head2Head meetings against the legendary lefty, but he played aggressive tennis to eliminate the World No. 2 6-2, 7-5.

“Rafa’s balls were landing short, which they do at times anyway, but normally they have enough stuff on them that they’re hard for people to attack. A lot of his balls were landing at the service line or just past the service line and when he was hitting his backhand, he would hit his normal backhand and it just doesn’t jump like his forehand,” Solomon said. “Diego was able to take the ball early and it was a good battle for him. He almost played his ball the way Djokovic plays Rafa’s ball.

“Djokovic has been successful against Rafa when he’s able to take the ball early and not let it get way up high on him with his two-hander, where he can’t do too much with it. You would think Rafa would be able to take his forehand and really get it to jump up high into the backhand of Diego and then be able to open up the court with the next shot.”

Solomon was highly complimentary of Schwartzman’s win against Nadal at the Foro Italico, and he believes the conditions are largely similar to those in Paris, where it has been cold and wet for much of the fortnight. That has prevented players like Nadal from getting their topspin shots to bounce as violently off the court as usual, which may play a role in their semi-final.

“You would think it would be a matter of time from an attrition point of view that Rafa would be able to physically and mentally dominate that match three out of five sets,” Solomon said. “But Diego plays amazing tennis and you never know.”

Schwartzman will crack the Top 10 of the FedEx ATP Rankings for the first time next Monday, an accomplishment that impresses Solomon. The American, who beat Guillermo Vilas three times at Roland Garros, admitted he believes Schwartzman’s “athletic ability is far greater than mine was”.

“It’s amazing every time he goes out there, wins matches and defeats these guys,” Solomon said. “He’s got a big fan in me.”

Thu Oct 8 , 2020
The young talent was asked about playing alongside the Portugal superstar and his club captain on Wednesday Portugal and Barcelona forward Trincao said it is “impossible” to pick between Cristiano Ronaldo and Lionel Messi as the world’s best player.  Trincao plays alongside Portugal captain and all-time leading goalscorer Ronaldo at international level, […] 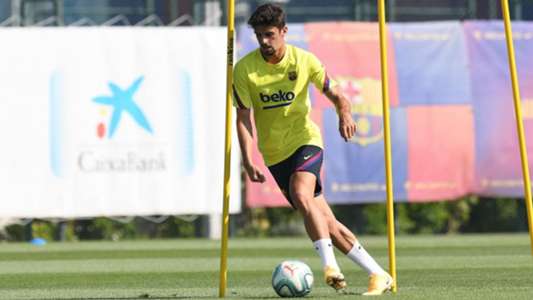