England manager Gareth Southgate has revealed Jose Mourinho messaged him privately to apologise after calling him “Gary” in a press conference last week.

The two coaches had been exchanging barbs over the selection of Tottenham star Harry Kane in the latest Three Lions squad.

Mourinho pleaded for the striker to be rested this week and jokingly promised not to play Kane in any friendlies in reference to England’s upcoming clash against Wales.

Southgate understood the Spurs manager’s worries but wasn’t so impressed with the public way in which Mourinho was voicing his concerns.

In one such public plea, Mourinho accidentally referred to Southgate as Gary rather than Gareth – a slip-up the Portuguese tactician was quick to apologise for.

“I have to say that he messaged me privately anyway to apologise,” Southgate said in a press conference on Wednesday.

“I knew because he has called me Gary before in a media conference a few years ago. Goodness me, we have coaches coming here who speak four or five languages so to get every nuance of that right, I have huge admiration of how they do that frankly. I have A levels in Spanish and French but that’s my limit.

“I have no issue with that as it all. I said to him: ‘There’s only one Gareth he has to get right, and that’s the one who will score all the goals for him this year’. So from my point of view, not an issue at all.”

Speaking before Tottenham’s 6-1 win against Manchester United on Sunday, Mourinho clarified his mistake and invited a name change of his own in an attempt to get even.

“When I told ‘Gary Southgate’, I promise, and I promise to him that I always thought with so many years [in] England that Gary was a short [for] Gareth,” Mourinho told Sky Sports.

“I called him Gary and I apologised to him, and I want to make that public because I only have respect [for] him and I thought I was being nice to him. So, he can call me John if he wants, and I will accept that.”

England face Wales in a friendly on Thursday at Wembley with Southgate’s side undefeated across their past five matches.

Wed Oct 7 , 2020
France 7-1 Ukraine: Centurion Giroud caps landmark appearance with double It was a night to remember for Olivier Giroud as impressive France routed Ukraine 7-1 at the Stade de France. Olivier Giroud celebrated his 100th cap with a double as France cruised to a 7-1 friendly win over Ukraine.  The Chelsea striker, named as […] 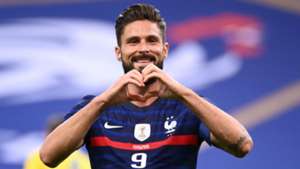