Liverpool boss Jurgen Klopp is worried the club’s injury crisis will continue to get worse, with Naby Keita the latest player to suffer an issue during the 3-0 win against Leicester City.

Keita was forced from the Anfield pitch in the second half of Sunday’s match after being seen stretching out his right leg shortly before physios came to examine his complaint.

However, the German coach intimated that he faith in his squad and suggested the talent that had come into his training squad had earned the right to be there.

“[Keita] felt his hamstring and was not able to play on,” Klopp said in his press conference.

He added to BBC Sport: “It’s a tricky situation and when Naby goes off with a muscle injury you know the problems will not get smaller. The boys know when they are allowed to train with us they have the quality to do so, we don’t give tickets for training, you have to qualify with talent and aptitude. It is a tough school, there a lot of steps to go.

“We have to make sure we recover but the Naby injury didn’t help at all.”

Even with a raft of absent players, the Reds had no issues dispatching a disappointing Leicester outfit with Jonny Evans’ unfortunate own goal getting the home side off to the perfect start midway through the first half.

Diogo Jota became the first Liverpool player to score in his first four home matches just in the shadows of half-time, before Roberto Firmino put the finishing touches on the content with four minutes to play.

Klopp was delighted with the performance of his stretched squad and singled out emergency right-back James Milner for his efforts before moving back to the middle of the park.

“We scored three goals and didn’t concede one, we defended exceptionally well, controlled the game, there were a lot of good things, I can’t pick one that pleased me most – maybe the performance of James Milner at right back. He played an exceptional game, first there and then in midfield.

“That is what we expect from ourselves, injuries were a massive shock in that moment but the boys have to offer solutions. We have centre halves, they are really young. They are not experienced, you saw the bench tonight.”

Liverpool’s victory sees them go top of the Premier League alongside Tottenham on 20 points, but be ranked behind Jose Mourinho’s side on goal difference.

Sun Nov 22 , 2020
The Swede scored twice but left the game prematurely, leaving the Rossoneri facing a potential striker crisis ahead of a busy period AC Milan’s 3-1 win over Napoli on Sunday was soured by a potential injury to leading marksman Zlatan Ibrahimovic. With 78 minutes of the Serie A encounter gone, […] 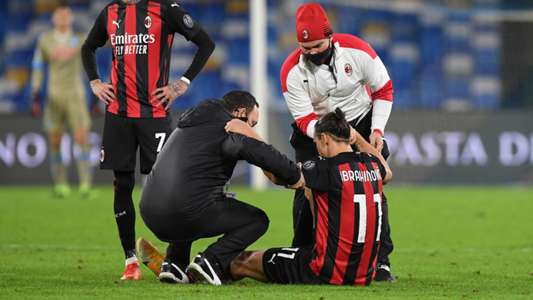