Manchester City midfielder Ilkay Gundogan has revealed the details of his difficult battle with Covid-19 and encouraged others to take the threat of the virus seriously.

Gundogan has yet to play in 2020-21 after City revealed he tested positive for Covid-19 last month.

The Germany international has said he is finally ending his quarantine phase and is back in training with his team-mates, but only after he was hit hard by the coronavirus.

“I’m healthy again and I’m back training with the team in Manchester after my test results were finally negative and I was able to end my quarantine phase,” the midfielder said in a statement.

“In the meantime, it had hit me hard. I had aching limbs at first. Then I was totally exhausted and my sense of taste was completely gone. I really didn’t feel good at all and I was just lying in bed for a while. Only after several days did I gradually get better. To be honest, I can’t remember the last time I was hit by an infection.”

After his battle with the virus, Gundogan urged others to take its threat seriously as the global death toll from Covid-19 has now surpassed one million.

“Due to current developments around the world, I would also like to express myself publicly – not to get sympathy, but simply to draw attention to it again. This virus is simply no joke,” he said.

“Because of the current figures in Germany, England and many other countries around the world, you have to take it that much more seriously.

“After the public announcement that I had tested positive, I read a lot of comments on social networks in the direction: ‘He’s fine anyway! He’ll chill at home for 10 days and then work out again.’ All I can say to these people is: No! Unfortunately, that wasn’t a pleasure.

“As a competitive athlete, of course, I don’t belong to the risk group, so I can still consider myself very lucky. Accordingly, my experience with the virus cannot be compared with the experiences of those affected who tragically lost family or friends. Nevertheless, as a person affected and in my role as a person, I would like to warn the public once again about the current situation.

“Everyone has to stick to the rules again: keep the distance and above all wear a mask. There are millions of people at risk, so everyone must live up to their responsibilities even if you are perhaps not at greater risk yourself.”

Gundogan could be in line to make his season debut on October 17, when City return from the international break with a game against Arsenal.

Fri Oct 9 , 2020
Kenya 2-1 Zambia: Nyakeya helps Harambee Stars earn rare victory against Chipolopolo The friendly meeting was the first between the two sides since they met five years ago in an Afcon qualifier which ended in a one-all draw The Harambee Stars shocked Zambia in a 2-1 win at Nyayo National Stadium […] 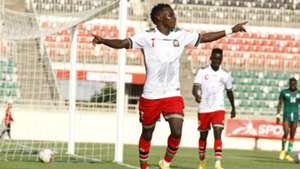