Stefanos Tsitsipas nearly completed a stunning comeback on Friday against Novak Djokovic in the Roland Garros semi-finals, rallying from two sets down to force a decider before the World No. 1 steadied himself to advance to the championship match. The Greek was disappointed to fall short and he left Court Philippe-Chatrier in awe of Djokovic’s level.

“For sure he has almost reached perfection, Novak, in his game style, the way he plays, which is unbelievable to see, honestly,” Tsitsipas said. “That inspires me a lot to go out and work and try to reach that perfection, that ability to have everything on the court.”

It won’t be the first time Tsitsipas has gone back to work after a tough loss. The reigning Nitto ATP Finals champion has proven he is capable of bouncing back. In the fourth round of the US Open, Tsitsipas let slip six match points against Borna Coric. Instead of falling into a slump, the Greek reached the Hamburg final and nearly reached his maiden major final at Roland Garros.

“I feel happy and at the same time sad. Could have been a better result for me today. Novak showed once again what an incredible athlete [he is] and his ability on the courts,” Tsitsipas said. “[It] was difficult, for sure, playing him. I think [he is] one of the most difficult opponents I’ve faced in my entire life. I have huge respect for that. He gave me a really difficult time on the court.”

If Tsitsipas laments anything, it will be his game plan. The 22-year-old used his aggressive backhand down the line to great effect to get back into the match, but it proved too late.

“I had an amazing comeback. I wish I could have figured certain things earlier… I felt like it was a total demolition… I tried things in practice and tried to implement them in the match. It was something new. I wish I wouldn’t have tried these things and tried to stay to my ordinary and basic way of feeling the ball and also trying to dictate the game,” Tsitsipas said. “I think that was a huge mistake today, that I tried this for two sets in a row, then came back to my old way of doing things.

“It was a good comeback, and I think I played great tennis after that, except [in] the fifth set, [for] which I believe my body was not ready. Physically I wasn’t really there.”

Read Feature: Get Your Tsitsi-mask Now Before Stef Buys The Lot!

Tsitsipas admitted that towards the end of the match an undisclosed injury he suffered in Rome returned. Nevertheless, he fought until the end.

“It was difficult to close the match in a fighting way, in a fighting spirit. But I tried my best despite all of this,” Tsitsipas said. “I’m happy that I came back from two sets to love down and tried to stay in the match as long as possible.”

This was Tsitsipas’ second Grand Slam semi-final. At last year’s Australian Open, he only won six games in the last four against Rafael Nadal.

“I was still a kid, and now I’m turning more into an adult. My thinking has changed. I’ve matured. I’ve been through a lot of things. I have grown from the people around me,” Tsitsipas said. “[I have gained] a lot of experience, a lot of physical improvement, I think. Also the ability to read the game a bit better. Also, for sure, 100 per cent, [I now have the ability to] be more relaxed on the court. I saw myself in videos two, three years ago, and I’ve matured a lot in a way that I’m more calm and more observant on the court.”

What was clearest on Court Philippe-Chatrier Friday evening was Tsitsipas’ fighting spirit. The fifth seed refused to lose until Djokovic finally put him away. Why does winning mean so much to the Greek?

“Without winning I wouldn’t have my sponsors. Without winning I wouldn’t be traveling all around the world. Losing kind of keeps you in the same place, in the same spot, which is why I hate losing. Of course, I think everyone hates losing. It’s weird if you don’t hate losing. But I guess a loss is a very good lesson where life puts a stop at what you’re doing. You can reflect on that. You can grow. You can get better. You can take that loss and turn it around, use it as a life lesson to move forward, to become a stronger person.”

Fri Oct 9 , 2020
The Danish striker has admitted that he allowed the luxurious lifestyle of being a footballer distract him during his time at Emirates Stadium Nicklas Bendtner has opened up on his relationship with Arsene Wenger and his career regrets, insisting he doesn’t blame the ex-Arsenal boss for his failures in north London. […] 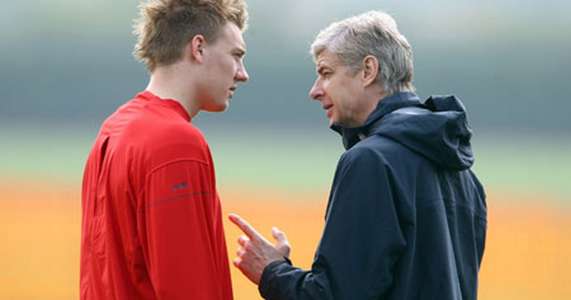